The Blues were left shell-shocked in the wake of their drubbing at Old Trafford that ruined new boss Frank Lampard’s first Premier League game in charge.

Lampard’s worst nightmare came true at the ‘Theatre of Dreams’ – to leave his flops on the floor ahead of Wednesday’s Super Cup final against Liverpool in Istanbul.

But Azpilicueta insists there is no time for Chelsea to feel sorry for themselves – and that the criticism is all part of being at a big club like his.

He said: “We’re obviously very disappointed with the result because we controlled the game – especially in the first half when we created a lot of chances.

“But we couldn’t score. It’s a tough scoreline to take, but we weren’t clinical enough in the boxes.

“In the end we got a tough result. We deserved more, but it is what it is and we have to move on.

“Chelsea always fight for everything, so when we don’t win then we know there will be more and more questions around us –  but we have to cope with it.

“We have to learn from the game. We know we can improve and we have to take responsibility. There is a trophy to fight for on Wednesday against a good team – so we have to be ready for it.” 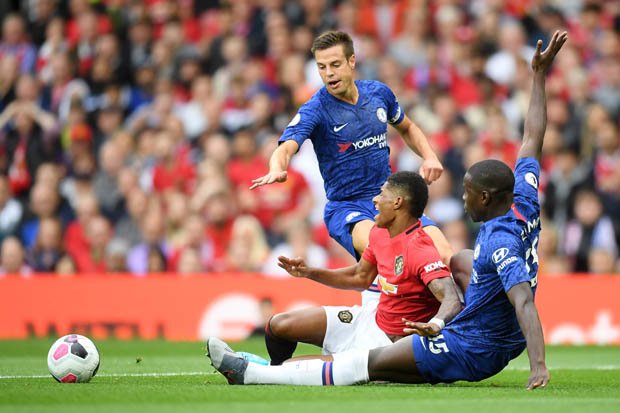 “they are here because they deserve to be here”

He added: “We trust in them – and they are here because they deserve to be here.

“They are fighting in every training session and now we have a massive opportunity to create a fantastic group.

“Everyone would like to start the season in a better way than this, but we have to learn from every game and come back stronger.”

Lampard was brave in his team selection at Old Trafford after starting with the likes of Tammy Abraham, Mason Mount and Kurt Zouma.

All three were on-loan elsewhere last season, but Lampard is determined to give youth a chance after taking charge of the Blues during a transfer ban.

Azpilicueta reckons the experience at United will make them stronger in the long run – and insists he has huge faith in the next generation of stars at Stamford Bridge.