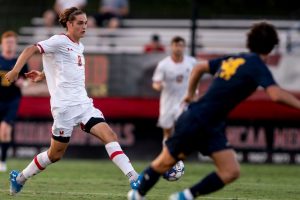 An All-Big Ten selection in his first two campaigns, Bender was the unanimous Big Ten Midfielder of the Year in 2021 for the Terrapins. As a two-way midfield presence, Bender will provide depth for a Charlotte side that also boasts Spanish playmaker Sergio Ruiz among its attacking options.

Charlotte will begin play as the 28th club in MLS in the upcoming 2022 season, with the North Carolina club’s inaugural match on Feb. 26 at D.C. United before it hosts the LA Galaxy in its home opener on March 5.

“It’s amazing,” said Bender during the draft’s livestream. “I just can’t wait to get started, and I know that the football down there is going to be a good brand and … I just want to be a part of that.”

FC Cincinnati took Indiana University goalkeeper Roman Celentano with the second overall pick. The first two-time Big Ten Goalkeeper of the Year, Celentano had a career record of 37-10-5 with the Hoosiers, allowing just 33 goals in 52 matches.

When asked why he selected Celentano, Cincinnati manager Pat Noonan told MLSSoccer.com, “It’s an area of need. He provides good depth. He’s going to come in with good character, good upside. We’ve seen and heard a lot about him in the previous months, and he’s going to be a nice piece to this team.”

FC Dallas then selected Saint Louis University attacker Isaiah Parker with the third selection. In his lone collegiate season, the left winger scored three goals and added seven assists. Parker’s speed is such that he could end up playing any number of positions for FCD.