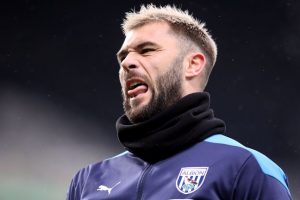 Charlie Austin has returned to former club QPR on loan for the rest of the season from West Brom.

The 31-year-old striker has been out of favour at the Hawthorns this season, making just seven appearances and he has yet to find the net despite scoring 11 goals in 38 games during Albion’s promotion to the Premier League.

During a successful two-and-a-half-year spell at QPR between August 2013 and January 2016, Austin made 89 appearances for the Hoops and scored 48 goals.

West Brom sporting and technical director Luke Dowling said: “I’d like to thank Charlie for his dedication and professionalism during his season and a half with us.

“Many of his goals for us proved to be crucial and I don’t think any Albion fan who was at St Andrew’s will forget his performance against Birmingham City to earn us a valuable win at what was a pivotal point in our season.

“Everyone at the training ground will miss Charlie’s presence and we all wish him well in his future career.”

The winter transfer window is open until Monday, February 1 at 11pm.