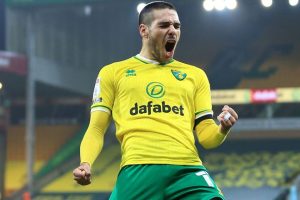 Norwich took another giant step towards an immediate return to the Premier League when they beat nearest challengers Brentford 1-0 at Carrow Road.

A sixth successive Championship victory took the Canaries 10 points clear at the top of the table with just 12 matches left to play.

The game was settled by a moment of magic from midfield maestro Emi Buendia who scored a brilliant individual goal midway through the first half to give his side the points.

It was a fourth defeat in six games for Brentford, who are now surely battling for the second automatic promotion spot with the likes of Watford and Swansea.

Watford moved level on points with second-placed Brentford after claiming a 2-0 win against struggling Wycombe at Vicarage Road.

Two goals from Andre Gray were enough for the Hornets, who now have an automatic promotion place in their sights.

Swansea are within a point of both in fourth after a last-gasp 2-1 win at Stoke.

Nick Powell put the Potters ahead early on at the bet365 Stadium, but Connor Roberts levelled shortly afterwards. The game appeared to be drifting towards a draw, but the Swans won a stoppage-time penalty which Andre Ayew converted to maintain their promotion charge. They also have two games in hand on Brentford and Watford.

Cameron Carter-Vickers scored after 88 minutes as Bournemouth won 2-1 at Bristol City and held onto sixth spot in the table.

Tyreeq Bakinson had put City in front at Ashton Gate, but the Cherries got level through a Dan Bentley own goal on the stroke of half-time, before Carter-Vickers sealed a big win late on.

Barnsley’s play-off charge continued as they beat QPR 3-1 to make it six wins in a row and remain within a point of Bournemouth.

Barnsley are now unbeaten in eight matches, while back-to-back defeats is a major blow for Rangers, whose recent four-game winning run raised hopes that they might yet challenge for the play-offs.

Rotherham gave their survival hopes a massive boost with a last-gasp 2-1 win at rivals Sheffield Wednesday.

Michael Smith gave them the lead in the first half at Hillsborough, but was then dismissed to leave the Millers with 10 men.

Matthew Olosunde then scored an unfortunate own goal with eight minutes to go to level the game for Wednesday – who were under the charge of new boss Darren Moore for the first time – but with the last kick of the game, Freddie Ladapo sealed victory for Rotherham, as they moved back to within three points of survival with two games in hand on the sides directly above them.

The Owls are now seven adrift of safety, albeit with a game in hand of their own.