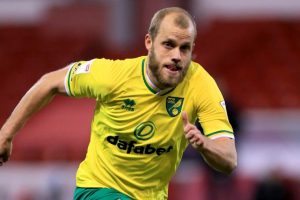 Norwich maintained their stranglehold at the top of the Sky Bet Championship table with a comfortable 2-0 win at Nottingham Forest.

Teemu Pukki scored his 23rd league goal of the season and Kieran Dowell added a second before half-time as the Canaries registered their ninth straight league win.

Daniel Farke’s side extended their lead over second-placed Watford to 10 points with 10 games remaining.

Barnsley maintained their play-off charge with a 3-1 win at Wycombe, despite the second-half dismissal of skipper Alex Mowatt.

Reds striker Cauley Woodrow converted from the spot in time added on at the end of the first half following Ryan Tafazolli’s challenge on Michal Helik.

Daryl Dike headed Barnsley 2-0 up and, after Mowatt had been shown a straight red card for his challenge on Scott Kashket, the on-loan American added his second. Uche Ikpeazu scored Wycombe’s late consolation.

Jordy De Wijs headed QPR‘s late winner as they fought back from 2-0 down to beat Millwall 3-2 at Loftus Road.

Millwall led 2-0 at half-time through Jed Wallace and Mason Bennett, but Charlie Austin headed QPR back into it and after Stefan Johansen had levelled, on-loan Hull defender De Wijs struck in the closing stages.

Blackburn and Bristol City drew 0-0 at Ewood Park, while Callum Paterson’s own goal denied Sheffield Wednesday victory in a 1-1 home draw against Huddersfield.