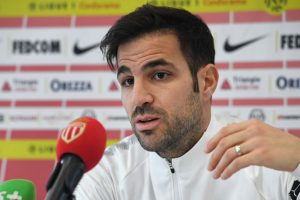 Cesc Fabregas and his Monaco team-mates were preparing themselves for a punishing Ligue 1 title race with PSG throughout pre-season – and that was before their rivals signed Ballon d'Or king Lionel Messi.

The former Arsenal, Barcelona and Chelsea midfielder was part of a side that beat the overwhelming title favourites both home and away last season – and watched on as Lille capitalised to top the table.

While those 3-2 and 0-2 victories will take some beating this time around, Fabregas has insisted that the achievements of himself and his team will not be defined by their silverware come the end of the season.

That realisation comes following notable title triumphs with both Barcelona and Chelsea – leaving Arsenal as his only major club where he wasn't crowned a league champion.

Although, with the help of Fabregas, Niko Kovac has his players focused on reaching the Champions League group stages and mounting an unlikely title charge – Messi's move from Barcelona to PSG has made that test even more improbable than it already was.

The World Cup winner with Spain played alongside Messi on 123 separate occasions during their time together at Barcelona – and Fabregas' colleagues had only his name on their minds after completing a comprehensive two-legged victory over Sparta Prague to reach the Champions League play-off round on Tuesday.

He exclusively told Daily Star Sport in association with BT Sport: "It's difficult to value achievements regarding trophies.

"Last year we didn't win a trophy but qualifying for the Champions League, playing in the cup final against PSG and competing in the league was already a big achievement.

Will PSG win Ligue 1 and the Champions League with Lionel Messi? Give us your thoughts in the comments section

"I felt proud to be with this group of players and the staff around the club and achieving good things. You have to think that when I arrived at this club in January 2019 they were second last with 13 points.

"We were there and we raised the level a lot by doing the good things in general at the club. We have a new training ground and new sporting director a new coach and new staff so things are growing in the perfect direction.

"I know everything seems to be trophies, and don't get me wrong I thought like this at some point as well when you pay for a big team you need to win trophies this is the way is if not it feels like you failed.

"But I think for the first time in my career you can feel that achieving something that is not a trophy can be as valuable as a trophy in a big team.

"You just need to understand where you are at any moment and take it from there to try and achieve the targets that the club want you to achieve."

Fabregas, who won the FA Cup with Arsenal and two Premier League titles with Chelsea either side of a three-season spell in La Liga, has seen palpable excitement among his young colleagues following Tuesday's news.

In addition, Fabregas himself has watched his anticipation grow of their December tie against PSG because of the arrival of an old friend – having hinted that this season would be his last in France.

He said on Tuesday: "I’m from Barcelona and it will be difficult for me to watch Barca without Leo, but that’s life. It’s a good thing for Ligue 1, which is turning a corner with Leo.

"All of my teammates have asked me a lot of questions about him. They are very excited to play against him. It is also a challenge for us.

"We are Monaco, we want to win, but I can’t wait to see him and play against Paris this year, even more than last year."

BT Sport is the exclusive home of Ligue 1 football in the UK and Ireland, with around 200 top-flight clashes available to watch this season. For more info, visit btsport.com