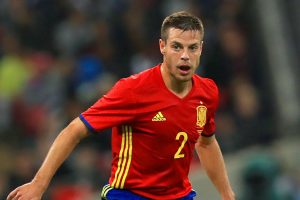 Cesar Azpilicueta has urged Spain to follow the example of their predecessors at the 2010 World Cup finals to get their Euro 2020 campaign back on track.

Luis Enrique’s men head into their final Group E game against Slovakia in Seville on Wednesday sitting in third place after draws with Sweden and Poland and knowing there is little margin for error if they are to make it to the knockout stage.

However, having watched from afar as Spain fought back from a 1-0 opening defeat by Switzerland to win the World Cup in South Africa 11 years ago, Chelsea defender Azpilicueta is confident they can still make their mark.

He told a press conference: “What’s required of us is to overcome these difficulties like the Spain squad did at the 2010 World Cup.

“I wasn’t there, but we have to take that example and take the opportunities in front of us, meaning that we could finish top or second in the group.

“Every tackle, every pass, every chance needs to be treated like all or nothing. I think we will do it.”

The Spaniards were held 0-0 by the Swedes in their opening fixture at La Cartuja despite dominating, and they had to make do with just a single point once again courtesy of Robert Lewandowski’s equaliser five days later.

However, Azpilicueta insists there is little point in bemoaning their failings to date when they can still determine their own destiny.

He said: “Right now the situation is one that the Spain team has coped with in previous international tournaments.

“OK, this is a younger group, but the reality is that we have it in our hands. There’s no point in wishing for six points when we don’t have them.”

A draw would be enough to send Slovakia, who launched their campaign with a win against Poland, into the last 16, but skipper Marek Hamsik, who played in a 2-1 European Championship qualifying victory over Spain in October 2014, knows that will be easier said than done.

Asked if he was surprised by their results to date, Hamsik said: “Of course. They were the favourites in our group and probably they themselves are surprised as well.

“But in football, you never know because every game is different. You always write a different story and tomorrow, it will be the same.

“Spain are the favourites. Everyone will expect their victory, but we will try to upset them. We need to get at least a point.”