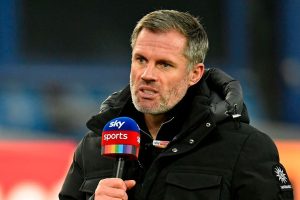 The non-league side were without a sponsor for the game after an unnamed sponsor pulled out of a package worth £20,000.

Marine, who play in the seventh tier of English football, have been without gate receipts due to covid-19 regulations for much of this season, and will play Spurs behind closed doors.

But Carragher, who grew up just round the corner from Marine in Crosby, Merseyside, has now stepped in to sponsor the club.

His non-profit, the JC23 Foundation, will sponsor the Marine dugouts and pre-match warm-up tops.

He heaped praise on Carragher and thanked him for the generosity, with the club set to host Spurs on Sunday in perhaps their biggest game ever.

Leary said: “We are indebted to Jamie and the JC23 Foundation for their support in this magical game for Marine.

“The JC23 Foundation do magnificent work in helping young people not just in Liverpool but right across the world.

“We are proud to partner with them on this special occasion.”

The club has also announced a raffle to help recoup some of the lost gate money from the game.

Marine have beaten Chester, Colchester United and Havant & Waterlooville to get through to the third round – the furthest they’ve ever been in the competition.

But due to Covid-19 regulations, all of those games have been played behind closed doors, leading to a significant loss of revenue.

They are hoping to raise £100,000, after the Merseyside area was plunged into Tier 3, meaning the game must be played behind closed doors.