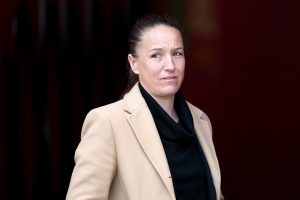 Stoney, who left her role as Manchester United Women head coach last month, is among the bookmakers’ favourites to replace Dean Keates, who was relieved of his duties by the Welsh club – owned by Hollywood actors Ryan Reynolds and Rob McElhenney – on Sunday, having failed to make the play-offs.

She revealed on Tuesday evening that she had been subjected to abuse over the speculation, saying she was content spending time with her family after three years with United, and calling out the guilty parties.

She tweeted: “For the lovely people on here that are abusing me for even being linked with a job in the men’s game please do yourself a favour & lower your blood pressure. I am happily spending time with my family thank you.

“If you have a daughter, sister, wife or mother you should be ashamed.”

The 39-year-old former England defender announced on May 12 that she had made an “incredibly tough decision” to step down from her Manchester United position at the end of the campaign.

The first season, following the team’s 2018 launch as a professional outfit, saw Stoney guide them to the Championship title.

United subsequently recorded two fourth-placed finishes in the Women’s Super League, ending up one point adrift of third-placed Arsenal in 2020-21 as the Gunners won the race for a Champions League spot.