Carragher and Neville’s ‘player to watch’ views have differing fortunes 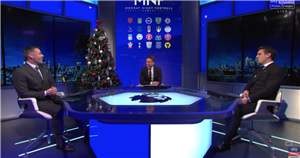 Gary Neville and Jamie Carragher are both great in the Sky Sports punditry but have suffered differing fortunes when it comes to their predictions.

Speaking in December and giving their 2021 predictions, the two former Premier League defenders were asked to name their player to watch for the year.

Neville said at the time: “I’ve said it for the last three years, because I still want him [Pogba] to drive Manchester United forward and be the player that he can be at the club and drive them towards a title.

“It sounds laughable at this moment in time but it’s what I’d like to see him do.”

While Carragher explained: “I thought he [Stones] was done at City. I remember watching City in the Champions League in the summer and Eric Garcia was playing ahead of him at centre-back.

“He’s only a young player, Garcia, but he doesn’t look like he’s ready for the Premier League. I thought it was a long way back for John Stones, Fernandinho was playing then as well.

“He’s now in the team, Laporte has been left out for John Stones, you’d never believe that a few months ago. If Stones can stay in the team, it brings England back into the equation.”

Stones has gone from strength to strength in recent weeks and is indeed part of the Three Lions set-up once more.

Pogba, on the other hand, has missed the last six Premier League games due to a hamstring injury, though did feature in the FA Cup quarter-final defeat to Leicester.

The former Juventus man has never quite lived up to his £89m price tag that United paid to bring him back to Old Trafford in 2016.

Neville’s hopes of Pogba guiding the Red Devils back to a Premier League title will not happen this year as Manchester City have the league all but wrapped up.