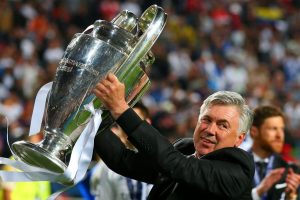 Everton have confirmed Carlo Ancelotti has left the club to join Real Madrid.

The Italian has left Goodison Park after just one full season in charge to return to the Spanish giants.

He joined Everton in December 2019 and signed a four-and-a-half year contract with ambitions to lead them into the Champions League.

But they finished 10th this season – his first full campaign in charge after a disappointing end to the season before his former club came calling to replace Zinedine Zidane.

Ancelotti said: “I would like to thank the board of directors, the players, and the Evertonians for the tremendous support they have all given me during my time at the club.

A club statement added: “Everton would like to place on record its thanks to Carlo for his service to the club over the past 18 months.

“The club will begin the process of appointing a new manager immediately and will provide updates in due course.”

Ancelotti said in the final week of the season that he was happy at Everton when he was asked about rumours linking him to a return to Real Madrid.

But then the Toffees suffered a 5-0 defeat by Manchester City on the final day which saw them miss out in European football and finish 10th.

Ancelotti has also been part of the planning for this summer's transfer window.

But the Toffees now must secure a successor – their sixth manager under owner Farhad Moshiri – in the coming weeks.

Ancelotti replaces Zidane, who left the club for a second time earlier in May having failed to win any silverware this term.

Zidane wrote an open letter to Real’s fans following his exit, where he suggested his relationship with president Florentino Perez had suffered over the past season: "I want there to be respect for what we have achieved together. I would have liked my relationship with the club and the president over the past few months to have been a little different to that of other coaches.”