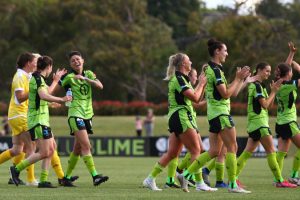 City had come back from a goal down, thanks to Jenna McCormick's powerful 77th minute header, which cancelled out Michelle Heyman's effort four minutes earlier, and the game looked to be heading for a stalemate – until Flannery's flourish.

It was very much a game of two halves, with Canberra on top in the first period as Heyman and speedy Kiwi winger Paige Satchell caused City problems.

City looked slow and unadventurous under the Canberra assault and they were fortunate to still be on level terms after an early Flannery shot from Satchell's cross was ruled out.

Heyman was also linking well with the busy Grace Maher and the striker was denied when her excellent header from a Kendall Fletcher cross was kept out by the diving Teagan Micah. 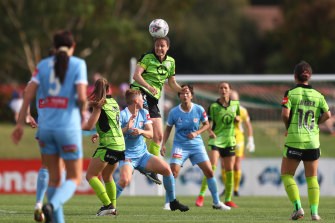 Canberra’s Kendall Fletcher heads the ball during round two between United and Melbourne City. Credit:Mike Owen

Canberra squandered an opportunity with Demi Koulizakis, the latest to join the club, when she took her shot too early and watched the ball drift wide.

The impressive Satchell drove just off target soon after the restart as Canberra looked for what seemed an inevitable goal.

But City began to get to grips with the Canberra threat, pressing higher and showing more aggression, forcing Sally James to make two saves in quick succession. The Canberra keeper then dived spectacularly to palm away Hollie Palmer's well struck shot just after the hour mark.

But Heyman broke the drought 18 minutes from time with an excellent finish, curling the ball round Micah after she had been played through by a well weighted through pass from Lauren Keir.

The lead did not last long, however, as McCormick's header from Chinatsu Kira's free kick thumped past James four minutes later.