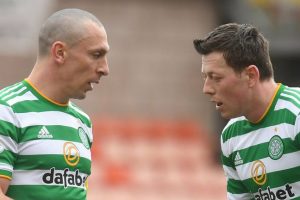 Former Celtic defender Charlie Mulgrew has backed Callum McGregor to follow Scott Brown as Hoops captain but urged him to do it his own way.

Hoops skipper Brown is joining Aberdeen as player/assistant next season after 14 years at Parkhead.

Fellow midfielder McGregor has taken over the armband in Brown’s absence and Mulgrew believes he is a natural replacement for “a Celtic legend, up there with Billy McNeill, Jimmy Johnstone, Henrik Larsson,” but due to his own attributes.

The 35-year-old former Celtic defender, who was on loan at Fleetwood from Blackburn before picking up an injury, told Sky Sports News: “Callum McGregor is a stand out candidate if you are looking at the Celtic squad at the moment.

“I have played with Callum with Scotland and at Celtic. He is definitely the person you would imagine would step in as captain.

“The most important thing is he doesn’t try to copy Scott Brown and he does it his own way.

“If he is chosen to be captain it is because of how he has been acting, not the way he is supposed to act.

“I am sure Callum McGregor would be a great candidate, someone who would do it well and I am sure he would do it his own way and lead by example.”

‘No-brainer to keep Griffiths at Celtic’

Mulgrew was talking ahead of the last Old Firm game of the season at Ibrox on Sunday where eyes will be on the Celtic team sheet to see if Leigh Griffiths gets a start.

The Scotland striker has been a bit-part player for the Hoops this season after returning to pre-season training last summer out of condition.

However, Griffiths showed again what he could do at Pittodrie last midweek when he climbed off the bench to head in with seconds remaining to grab a 1-1 draw against Aberdeen.

Mulgrew pointed to the two free-kicks Griffiths scored in a 2-2 World Cup qualifying draw against England at Hampden Park in 2017 as evidence of why Celtic should take up the option in the forward’s contract and why Steve Clarke should get him back in his squad for this summer’s Euros.

“Get him fit, get him confident, because confidence is big in football, get him scoring goals. I think it is a no-brainer.

“Also, if I was Scotland, I would get him in the Scotland squad somehow for the Euros because he is a goalscorer.

“You saw what he did against England the last time and he turns up for the big occasions.