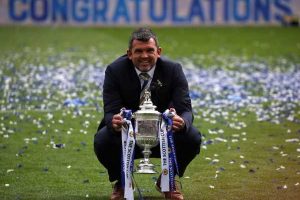 Callum Davidson has had to make “difficult decisions” as he starts to reshape St Johnstone’s history-making squad.

Davidson has begun preparing for next season by releasing Guy Melamed, John Robertson and Craig Conway at the end of their contracts.

Saints are in contract negotiations with Scott Tanser and Michael O’Halloran, whose deals also run out, with the latter linked with St Mirren.

Loan players James Brown and Glenn Middleton are returning to parent clubs Millwall and Rangers respectively, although Saints are in talks to bring the former back.

Davidson told the club’s official website: “The squad gave the football club 100 per cent and that’s why we won the Cup double and qualified for Europe.

“I’d like to thank them all as they were very professional and a pleasure to manage. I wish them the very best of luck in the future.

“As a manager you need to make difficult decisions but it is part of the job.

“We will now focus on trying to bring in one or two new players for the start of the season.

“We are also in discussions to bring James Brown back. We are all working very hard on a number of things in the background and we’ll keep our supporters updated.”