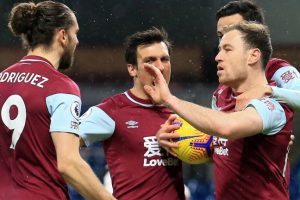 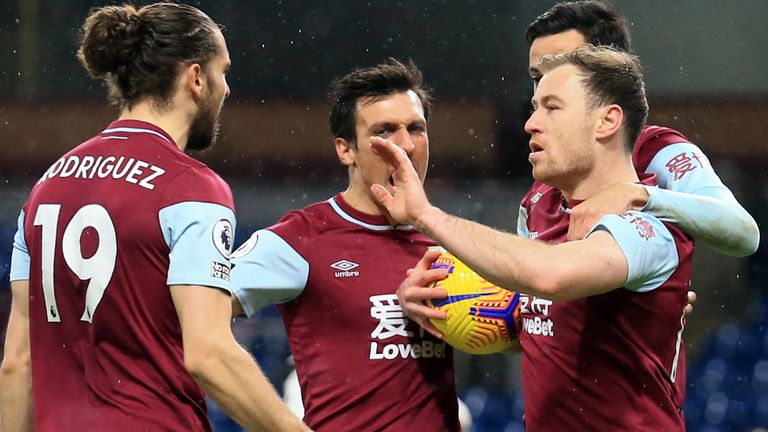 Team news, stats and prediction ahead of Burnley vs Arsenal in the Premier League on Saturday (kick-off 12.30pm).

Jack Cork could add to Burnley‘s injury worries for the visit of Arsenal.

The midfielder played with a hamstring problem in the midweek draw with Leicester and must be assessed along with Johann Berg Gudmundsson and Robbie Brady, who are being nursed back to full fitness.

Striker Ashley Barnes, however, remains out.

Arsenal will be hoping to have Emile Smith Rowe available.

The attacking midfielder suffered a muscular injury in the 3-1 win at Leicester but manager Mikel Arteta does not believe it was a serious problem.

The Gunners have no other fitness concerns as the likes of Bukayo Saka and captain Pierre-Emerick Aubameyang push for recalls having been dropped to the bench last time out.

Follow Burnley vs Arsenal in our dedicated live match blog. Highlights will also be published on the Sky Sports digital platforms and the Sky Sports Football YouTube channel shortly after the final whistle.

Having watched they way Burnley took the game to Leicester on Wednesday night, you’d be a brave man wading into the 8/13 with Sky Bet for an Arsenal away win. I was confidently on the double chance result in midweek (draw or Burnley win vs Leicester) and that looks the way to play again here with Arsenal so skinny in the market. Only a Kasper Schmeichel masterclass kept Burnley at bay.

Barring their stinky performance at home to West Brom, Sean Dyche’s men have been back to their bruising and dangerous best, winning comfortably at Crystal Palace, winning the xG battle against Brighton – a mighty feat – and creating an expected goal figure of 1.79 in the draw with Leicester, their third-highest figure in over a year. It shows Burnley are able to create good quality chances playing their style of football and although Arsenal arrive in good form, this is a team that have slipped to defeats at Wolves and Aston Villa this year.

Yet again Dyche’s men are underestimated by the market. They’ve taken four points off Arsenal in the last two meetings and look rock-solid to avoid defeat once again.

In this week’s Pitch to Post preview podcast Alice Piper is joined by Sky Sports News reporters Ben Ransom and James Cooper to look ahead to the Manchester derby. Can City end United’s 21-game unbeaten away run to stretch their Premier League lead to 17 points?

We also hear from Rob Dorsett ahead of the Midlands derby between Aston Villa and Wolves, with both sides looking to return to winning ways.

And Michael Bridge gives us his verdict on Tottenham’s recent resurgence, as they prepare to welcome Crystal Palace.