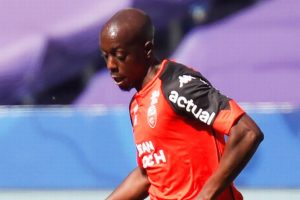 Lorient striker Yoane Wissa has been rushed to hospital after ‘having burning liquid chucked in his face’ at his home.

The 24-year-old star was allegedly the victim of the attack which happened on Thursday night.

According to French outlet L’Equipe, the winger was assaulted by a woman who threw liquid in his face.

Reports in France claim that the lady turned up at his house yesterday afternoon requesting an autograph for her son.

Wissa reportedly obliged and gave his signature as an act of ‘good grace.’

At around midnight, the same lady is alleged to have returned and entered his home.

Wissa is said to have confronted her, at which point she allegedly threw liquid at him, reportedly causing burns to his face.

The Ligue 1 star was taken to hospital after the alleged incident, where he is believed to be in a stable condition.

L'Equipe also reports the public prosecutor of the TJ of Lorient, Stephane Kellenberger, as saying: “His [Wissa's] life would not be in danger, but the seriousness of the injuries will have to be assessed”.

Following the attack, Wissa’s club Lorient released a statement condemning the act and offering their support to the star.

It read: “FC Lorient learned this morning that Yoane Wissa had been the victim of an assault at home during the night before being hospitalised urgently.

“Yoane is due for surgery today.”

It added: “The club, in shock, want to show their support for Yoane and his family and wish their player a speedy recovery.

“FC Lorient is counting on justice to convict the author of this attack.”