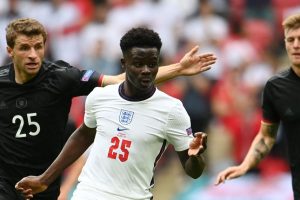 Arsenal star Bukayo Saka has been lauded by fans and pundits for his 'fearless' first-half England display against Germany.

The 19-year-old was given a huge opportunity by Gareth Southgate to start in the Three Lions' Euro 2020 round-of-16 clash against their rivals.

His forward partners Harry Kane and Raheem Sterling both had opportunities to score that they could not take.

Despite this, the youngster who enjoyed an impressive 45 minutes, getting past Antonio Rudiger several times on the right side of the attack.

And fans were quick to heap praise on Saka for his first-half performance at Wembley in the knockout clash.

"Saka is fearless, man. Kid was playing U21 football less than a year ago. Got Rudiger on strings," one supporter said.

Another commented: "I love Saka, so fearless!"

While a third simply added: "Saka is indeed fearless."

And a fourth compared him to the other England players, with: "If only they were all more like Saka.

"He’s the only fearless lion so far. The rest look like cubs."

Saka's first-half performance also earned praise from the Match of the Day pundits.

Manchester United hero Rio Ferdinand said: "We talk about being fearless as a young player, he’s got no qualms about going and roaming around the pitch.

"He picked the ball up all over the pitch and what was great about him is that he had the confidence to go at them.

"He’s the one player who’s receiving it and driving with it at times. He’s drawing fouls where we seem very dangerous in those areas.

"He’s got that unpredictability in the team. He gets it and you don’t know if he’s going to go left or right.

"The one thing you do know is that he’ll take the ball to people. He’s willing to get onto it and turn defence into attack."

While Alan Shearer added: "We struggled for the first 10 minutes to get into the game, but once we got in there we passed it around and moved it around and created one or two chances.

"Saka I thought was very lively on that right hand side, very comfortable in receiving the ball under pressure, taking a touch and turning and running at that German defence.

"We’ve got to get him doing more of that."