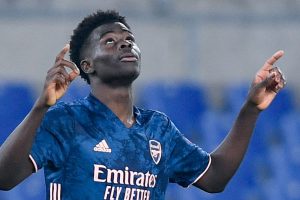 Bukayo Saka rode to the rescue yet again as Arsenal came from behind against Benfica in Rome.

But Mikel Arteta moaned that the Gunners missed a golden opportunity to book their place in the last 16.

Saka struck his fifth goal in 12 games to level this last-32 tie up after Pizzi scored from the spot for the Portuguese.

Arteta said: “I think it was a missed opportunity. We were dominant. Away from home you have to be more ruthless. We could be in a much better position.

“It was disappointing the way we conceded the goal. Both teams dropped in the last 20 minutes. But overall we should leave the ground with more.” In-form Saka, 19, dragged Arsenal back on terms as they warmed up for Manchester City on Sunday.

Since the start of last season, Saka is the youngest Premier League player to reach double figures in goals and assists in all competitions, with ten and 16 respectively.

Saka said: “We should have won. Definitely. We had a lot of chances. We’re frustrated. We dominated the whole game.

“They scored with a lucky penalty which I don’t think was a penalty. He’s had to react to it. We dealt with it well, got a goal back and could have won.”

Arteta was so pleased with the win over Leeds he named the first unchanged Arsenal team since September 2018. But the hat-trick hero from that game missed a sitter when Dani Ceballos split the Benfica defence to play Hector Bellerin through.

His low centre was on a plate for Pierre-Emerick Aubameyang, but the Gunners skipper took his eye off it and somehow prodded wide with the goal gaping.

They were made to pay when Smith Rowe gave away a 54th-minute penalty, handling a routine cross.

Bernd Leno’s goal had not been in any danger, but Pizzi beat him from the spot and suddenly Arsenal were facing an uphill battle.

They responded brilliantly, with Saka slotting home at the far post after good work from Cedric Soares, and that was how it ended.

It means Arsenal have a priceless away goal ahead of next week’s second leg in Athens.

And they have progressed from 13 of their last 16 knockout ties in major Uefa competition when drawing or winning the first leg away from home.

But it could have been so much better if Arsenal had taken their chances, and they have now left the door open for their opponent.

Aubameyang said: “We deserved better and I should score a couple of goals today but still one game to go. We keep going.”