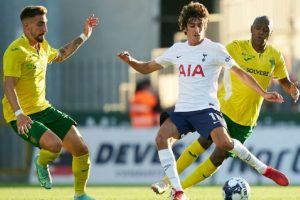 Tottenham fans got their taste of what life could be without their talisman Harry Kane this week.

Kane was omitted from Spurs’ 1-0 triumph over Manchester City before being left behind for their shock 1-0 defeat at the hands of Pacos de Ferreira in the Europa Conference League on Thursday night.

On paper, Spurs have far from passed their first two assignments without their talisman with flying colours.

The pair have struck up an almost telepathic partnership – an understanding which saw them break the Premier League record for most goal combinations between them after combining to strike 14 times for Spurs last season.

Despite the issues with Kane, Spurs have no such worries over Son; the South Korean star starred in the triumph over Premier League champions Manchester City, netting the winning goal.

His contribution will be more vital than ever if Spurs really do have to face up to a future without their 23-goal talisman – but he won’t be able to do it all alone.

JUST IN: Man Utd and Tottenham among five clubs who could sign Lewandowski after latest twist

With all the furore over the Kane saga, the signing of Bryan Gil from Sevilla seems to have almost flown under the radar.

Spurs sacrificed the services of Erik Lamela – along with a fee of £21.6m – to secure the signature of the exciting young Spaniard.

And Gil showed that he has the quality to play a part in life without Kane this season on Thursday night.

So expectation will naturally shift on to Gil and the next generation of attacking talent in North London to find their feet quickly to smooth Tottenham’s transition without their talisman.

Even if that scenario doesn’t materialise and Kane remains in North London, patience will still be required with Gil – something new Spurs boss Nuno Espirito Santo has already stressed.

“He’s going to face the toughest competition in the world in the Premier League, where are the best players, the best defenders.”

Spurs attacking signings have a history of failing to make the grade in North London – something which will be even more of a concern should they have to replace Kane.

Steven Bergwijn, one of Spurs’ most recent signings in that department, made a stunning start to his Tottenham career, netting on his debut in a win against Manchester City.

But since then the goals have dried up. The Dutch attacker has managed just three other Premier League goals over the past 18 months.

That lack of prowess in front of goal and a lack of bodies in the attacking ranks pretty much guarantees there will be opportunities for Gil to make an impact during his maiden season in England – with or without Kane.

Gil knows goals are something that he will have to add to his game long-term after netting just four times for Eibar last season.

But it isn’t inconceivable for that to happen. The youngster will be surrounded by better players than he was in La Liga last year, which should give him the platform to flourish.

He already looked a cut above the rest of the Spurs team on a disappointing night in Portugal, so the early signs are promising.

But it’s still very much acknowledged that he remains a long-term project.

Gil certainly isn’t going to solve Nuno’s Kane conundrum right now – but there is early scope to suggest that he can at least buck the recent trend of Spurs attacking signings who have fallen impotent in the final third.