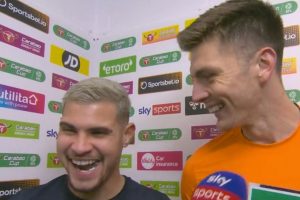 Pope made two stunning saves in the second half of Newcastle’s 1-0 Carabao Cup semi-final win against Southampton. The England international, 30, denied Che Adams on both occasions to ensure the Magpies took their one-goal advantage back to St. James’ park for the second-leg.

And Pope’s heroics were specifically highlighted by his teammate Guimaraes in their joint post-match interview.

READ MORE: VAR fails to step in over disallowed Newcastle goal as there 'wasn't enough angles'

The Brazilian midfielder said: "We controlled the game but we missed big chances. It's just the first game, now we need to think about the next one. I'm proud of the team today.

“I would like to say thanks to Nick Pope, he’s been brilliant for us. I think he’s the best goalkeeper now in the world.”

The touching moment warmed the hearts of Newcastle supporters watching at home, who could not help but gush over two stars who have transformed the team since their respective 2022 moves.

Do you think Nick Pope has been the best goalkeeper in England this season? Let us know in the comments section.

One Magpies fan wrote on Twitter: "Bruno says Nick Pope is the best goalkeeper in the world. I’m not crying. You are.”

Another added: “How can you not love Bruno man he’s the f****** man, was class tonight.” Others chimed in by tweeting: “Heartwarming,” and “I love these two blokes.”

It was high praise coming from the Brazilian, who played alongside two of the world's most respected keepers in Alisson and Ederson at the World Cup. But his bold claim may very well have been justified.

Pope has now kept 10 successive clean sheets across all competitions – a feat not managed by any other Premier League goalkeeper since the start of the 2012-13 season. Newcastle have also conceded the fewest goals (11) in the league with Pope in-between the sticks.