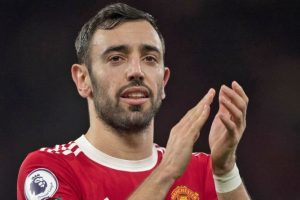 Manchester United star Bruno Fernandes has opened up on his ambitions at the club amid his contract stand-off. Talks with the Portugal international have stalled in recent weeks, with the Glazers keen to tie him down to a new contract. And trophies, it seems, are heavily on his mind.

The Portugal international appears to have rediscovered his best form, scoring two goals and clocking up two assists in his last three matches.

However, behind the scenes, contract talks have recently stalled.

The Red Devils are keen to keep hold of their No 18, who has been a substantial hit since arriving from Sporting Lisbon two years ago.

He’s contracted to the club until 2025 at the current moment in time but wants an increase on his £100,000-a-week wages.

And Fernandes, speaking to the club’s matchday programme, has now revealed he will always try and win trophies with the Red Devils until his very last game.

“My ambition is still the same,” said the Portugal international.

“I want to win trophies with the club. That will always be in my mind until the last day I am at the club.

“I don’t know when that will be but, until then, I will believe that I can win trophies with this club because I think we can and I think the club deserves it, the fans deserve it and also the players, we deserve to win a trophy.

On the current season, Fernandes admits the club won’t be winning the Premier League title.

Yet he feels he and his team-mates have the potential to go far in both the Champions League and FA Cup.

“Of course, in the league it is too far now,” added the midfielder.

“We have to be realistic and we have to fight or the top four and being in the Champions League next season.

“At the same time, fight for the Champions League and the FA Cup.

“I don’t care what people think or can say about us winning the Champions League or the FA Cup.

“I think we have the chance to win it, the qualities to win it and, most of all, we are in those competitions.

“Until we are out, we have to believe we can win those competitions.”

The Red Devils lost to the La Liga side on penalties back in May, robbing them of the chance to win a trophy in the process.

And Fernandes said, when asked which game he’d like to replay the most, said: “Probably the final of the Europa League.

“That was the most difficult until now, because I felt the better team lost.

“They played a really good game and the team that won is always the best one, you can say.

“But no, obviously, that was one I’d like to repeat. I’m sure if we played that one again, we would win.”