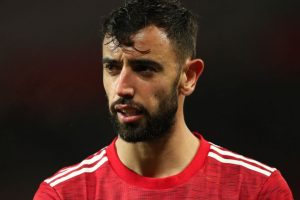 Bruno Fernandes’ sensational impact has turned everything around at Manchester United but could he also repeat the feat of Eric Cantona and propel the club to the Premier League title?

Paul Ince was part of the United team that ended that 26-year wait to become champions of England and sees echoes of Cantona’s inspiration in the performances of Fernandes.

“When I look at Cantona, we had already won the Cup Winners’ Cup against Barcelona and the FA Cup so we weren’t that far away, it was just the league that was eluding us at that time,” Ince told Monday Night Football.

“I had seen Eric play in the Charity Shield at Wembley when he scored a hat-trick [for Leeds against Liverpool] and thought that he looked a decent player, let’s see what he looks like when he comes to Old Trafford.

“I came in during 1989/90 and Bryan Robson was my idol, Mark Hughes, all these big names. I was as scared as anything and just sat in the corner and didn’t say a word.

“I thought it would be interesting to see how Eric is when he steps into the club.

“He walks in, 6ft 3in, a statue of a man, with a massive presence about him. He just sat there and belonged at Old Trafford.

“He came in and knitted us all together. He was that missing piece in the jigsaw. The goals he created, he made everyone raise their game.

“I think that is what Fernandes has done.” 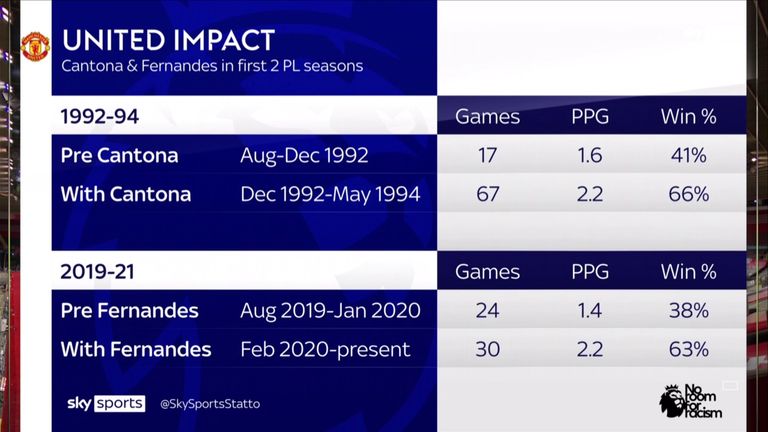 Cantona scored nine Premier League goals in his first season as a Manchester United player and his numbers are quite similar to those of Fernandes across his first two campaigns.

What he did do was score big goals.

“Eric could do absolutely everything. It was just those moments where you had to win the game. People were chasing us and we did not win the title by a lot.

“Much-needed goals. You know, those moments when you start to worry, start to panic, and the game is not going your way and you don’t know where the goal is coming from.

“That is when he would pop up and score a vital goal.

“I think that is probably the same with Fernandes. He scores vital goals.” 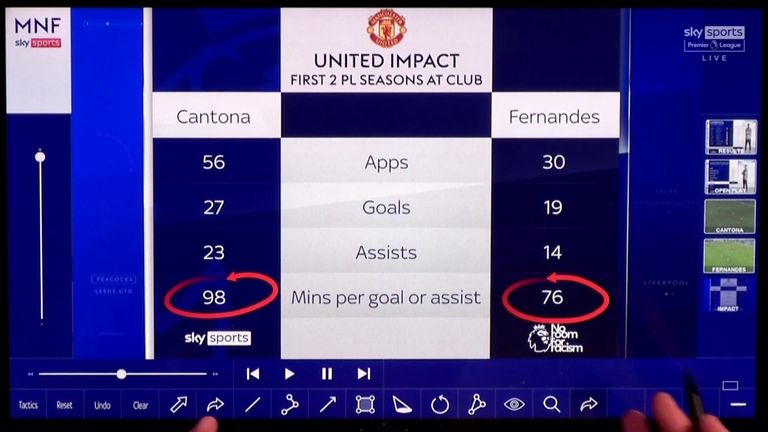 Fernandes’ goals and assists make his impact obvious but Ince is also drawn to that ability to bring the best out in others, showing real leadership since his arrival from Sporting.

“I think he was very impressive when he first came. He hit the ground running. This year, I don’t think he has been as impressive but he is still a major factor in the team. He is still the talisman.

“The players love him and he has got a character about him. We talk about character all the time and how we are losing that trait in football. But there was a time when I watched him have a go at [Victor] Lindelof. He puts demands on players.

“For someone to come from a foreign country, Portugal, to a club like Manchester United and put demands on his players. He is a winner and it is infectious.”

What remains to be seen is whether or not Fernandes can make the difference in the biggest moments when the title could be on the line – as Cantona did for United.

“Now the pressure is on because we think they might win the title. That is the mark of a great player – what do they do when it really matters? I am not saying that is not going to be the case with Fernandes. He has got the quality to do it.”

It is approaching 25 years since Cantona retired from professional football as a Premier League champion with Manchester United.

So what is his legacy?

Ince believes that it is not what it should be outside of Old Trafford.

“I don’t think he is underrated by Manchester United fans because whenever we can get fans into the ground you always hear them singing his name. He has got his own song. Anyone who has their own song, that shows how great he is.

“But when we look at the wider picture, compared to Alan Shearer, Gianfranco Zola and Thierry Henry, I don’t think he gets appreciated as much as he was.

“He came in and was a major factor in that.

“I think because he did not have the longevity, he does not get picked in that elite group but as far as I am concerned he should be right at the top of the list.”