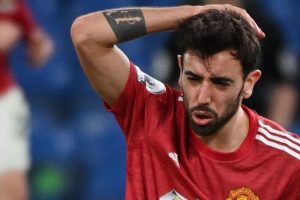 Bruno Fernandes endured another afternoon to forget against a top six rival in Manchester United's stalemate at Chelsea as he's accused of "trying too hard".

The Portuguese playmaker has been crucial for the Red Devils this season.

His goal involvements have underlined his quality and importance to Ole Gunnar Solskjaer's side.

But his record against the Premier League's top sides has come in for criticism.

This season his penalty against Tottenham back in October is his only goal in seven games against United's top six rivals.

Rene Meulensteen, who served as Sir Alex Ferguson's assistant, believes opponents are figuring out how to nullify Fernandes and that the 26-year-old can end up forcing things.

He told Stadium Astro: "When he influences games, he's on the ball a lot.

"He drifts everywhere, players are more than happy to give him the ball and he's established a link with the front players like Rashford.

"But the bigger teams do their homework.

"They know that if you can stop Fernandes getting on the ball or into danger areas and stop the passing lines he's looking for, you basically stop Manchester United from creating anything.

"He's trying too hard maybe at times and that's why things don't work.

"Sometimes less is more. Be a little calmer, make sure you influence the game and keep it ticking over.

"That's what I feel is missing to give United a real rhythm of play."

Fernandes' frustration was evident on Sunday in west London.

United again dropped points which means they find themselves 15 points behind leaders Manchester City ahead of tonight's clash with Crystal Palace.

Solskjaer has claimed his team have a "score to settle" having lost to the Eagles in their opening game of the season.