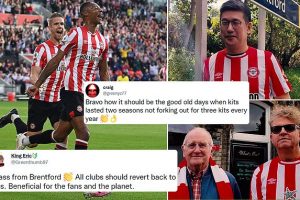 Brentford have made quite the splash in the Premier League this season – and have now been praised again for opting to keep their current home kit next year.

To help supporters save money, and in a bid to protect the environment, the club will turn out for the next campaign in the exact same red and white striped shirts.

Wearing that jersey this term, the top-flight newcomers have started superbly, and they have received glowing feedback on social media from impressed users. Those wanting to pick up a home kit would have to spend £49, but for next season they will be able to put this money to better use after Brentford’s decision.

In choosing not to release a new design, the west Londoners have gone against what is now the standard in football, with teams releasing three new strips every season.

By reducing the carbon emitted during the production of a new kit, Brentford are doing their part to help the climate emergency, too. The club have made a splash in their Premier League return, and have been widely praised They are able to avoid pushing out a new kit because commercial and broadcasting revenue in the Premier League is significantly more than retail income.

And the move has today been lauded by supporters from a variety of clubs.

‘Well played Brentford and Umbro,’ one Twitter user said. ‘Brave move and to be applauded.’

Another wrote: ‘Bravo, how it should be – the good old days when kits lasted two seasons, not forking out for three kits every year.’

‘On behalf of all the neutrals… please stay up,’ a third said. ‘The league needs you.’

Another added: ‘Class from Brentford. All clubs should revert back to this. Beneficial for the fans and the planet.’

‘This is a great move by Brentford,’ a fifth fan posted. ‘They have decided to extend their home kit through next season. We need to see more PL clubs take climate-friendly actions, and Brentford are leading the way here. Well done!’

In a bizarre twist, however, the club have been hit out at by some users as being ‘lazy’ for not sporting another shirt next season.

But one supporter has hit out at the doubters, saying: ‘How is this lazy? What is the need to change home shirts every year? This will save people a lot of money.’

However, Brentford will have new away and third strips for the 2022/23 campaign.

Jon Varney, Brentford FC Chief Executive, said: ‘Whilst it is not normal practice for Premier League clubs to roll a kit over for two seasons, fans have told us that they would be in favour of the savings that a two-season shirt would provide.’

Varney also admitted that, as a result of their Premier League promotion, ‘now is the perfect time’ for the club to ‘try something different’ without taking a financial hit. He went on to add: ‘We also think this is a step in the right direction to help the environment a little.

‘It can only be a good to reduce kit cycles where circumstances allow, and we will continue to work with Umbro to make sure the production of our kit is as sustainable as possible.

‘It is only a little thing, but we believe it will help.’