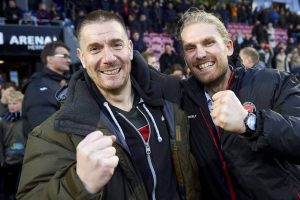 Brentford Football Club will play in the top division of English football for the first time in 74 years after securing promotion to the Premier League, and they have one man to thank more than any; Matthew Benham.

The Bees beat Swansea City in the Play-Off Final at Wembley last Saturday to cap off an incredible season for the club. Thomas Frank's side enjoyed a brilliant campaign, led by the goalscoring exploits of Ivan Toney.

Just over ten years ago, however, Brentford were playing in League 2 in front of crowds of approximately 4,000. This promotion has capped off a meteoric rise up the domestic football ladder.

While the performances on the pitch cannot be overlooked, it's unrealistic to think the club would be anywhere near where it is now without the investment from Benham.

Benham, who was a childhood Brentford fan, has somewhat shot to fame since the promotion, with a viral Twitter thread suggesting the millionaire had gambled his way to the top with the club.

However, that Twitter thread has circulated some slight inaccuracies, as Daily Star Sport explains his incredible story.

The Twitter thread suggests Benham made an initial loan of $700,000 to bail the club out of financial difficulties.

The thread suggests there was a "catch" that Benham would be able to buy the club if the debts were not repaid by Bees United, the fan group that owned the club at the time.

However, while it is true that Brentford were languishing in the lower leagues and struggling financially, it is inaccurate to suggest that there was a "catch" on his initial investment.

Brentford fanzine Beesotted instead claims Benham offered to loan £1million a year for five years, without a catch and interest fee.

Two years after Benham's initial investment, the childhood fan had invested approximately £20m, with fans holding an extraordinary meeting to ask Benham to buy the club outright, which he did.

Benham has now invested approximately £100m into the running of the club over the years, though promotion to the Premier League will earn the club – not Benham – a pot in the region of £300m, through parachute payments and television money.

The truth about 'Moneyball'

Following Brentford's promotion to the Championship, Benham decided to take the club in a new direction, something labelled at the time as 'Moneyball'.

The Twitter thread suggests Benham fired those who weren't willing to go along with the new plans, something reported at the time when manager Mark Warburton left the club.

However, in truth, those members of staff are believed to have been given the opportunity to stay, with Warburton offered the chance to stay in a head coach role.

The manager left, along with members of his coaching staff, and was replaced with Marinus Dijkhuizen – who was fired after nine games due to poor results – with Dean Smith taking over shortly after.

The new model was based on statistical analysis and recruitment based on a number of factors – one of those being expected goals. That became known as 'Moneyball' based on the baseball analytical book from Michael Lewis, which followed the Oakland Athletics' decision to adopt a similar model with regards to recruitment.

Like the Oakland A's, Brentford knew they couldn't afford to compete with their rivals in terms of bidding for players, and instead had to think of ways to put themselves ahead in the transfer market by buying under-valued talent and selling players when their stock was high – as they have done in recent years with the likes of Ollie Watkins (£33m), Said Benrahma (£25m), Neal Maupay (£18m) and Chris Mepham (£12m).

Benham doesn't just own Brentford, but he also owns Danish side FC Midtjylland after becoming majority shareholder in 2014.

Following his acquisition of the club, Benham continued to invest money, while running a similar statistical approach as he did with Brentford.

That approach saw Midtjylland win the Danish Superliga in his first season as owner, the first time they had won the title.

The viral Twitter thread suggests that Benham used Midtjylland as a test for the way he ran Brentford, but that is far from the truth.

Instead, his investment in the Danish side has seen them win three league titles in seven years, with two second-placed finishes.

Throughout the 2-0 win over Swansea, Brentford fans sang the praises of their owner with numerous renditions of 'There's only one Matthew Benham', as they have done throughout his tenure at the club.

He often shies away from the limelight, and is rarely one to give interviews. That can be proved by one instance following a promotion when fans were singing his name, only for the businessman to ask them to sing another name instead.

But following the game at Wembley, Benham was spotted by fans on the pitch celebrating with director of football Rasmus Ankersen and chairman Cliff Crown.

Club captain Pontus Jansson posted of Benham: "This man deserves so much praise for what he has done for our club. Unbelievable journey and I'm so thankful for all knowledges people around that you can learn from."