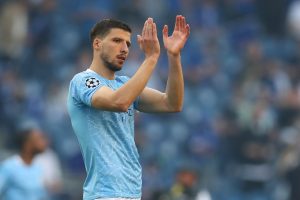 Manchester City's Portuguese defender, Ruben Dias, has been named as the 2020/21 Premier League player of the season after claiming the Premier League and Carabao Cup.

Dias has completed the individual double – after being named as the FWA (Football Writer's Association) player of the season in late May.

The 24-year-old fended off competition from teammate Kevin De Bruyne, last years recipient, Manchester United's Bruno Fernandes, and a hatful of other Premier League stars to the award.

And, alongside John Stones, he has played with a swagger that has been the envy of the league: as City bulldozed their way to a third title in four years.

City's success last campaign was built around their defensive solidity.

Dias arrived in Manchester from his native Benfica last summer for a fee of £61million, after a lengthy search from the Citizens for defensive cover.

The Citizens swept aside the league – thanks to a run of form over the Christmas period – won the Carabao Cup, and reached the final and semi-finals of the Champions League and the FA Cup respectively.

Do you think Dias should have won? Let us know in the comments section

Dias was one of six City players to make it into the PFA Team of the Year, and he becomes only the second defender to receive the award since 2000.