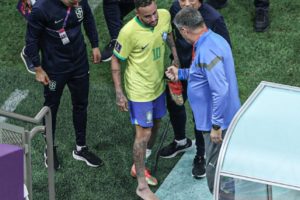 Brazil’s team doctor provided an update and set out a timeframe for Neymar after the Paris Saint-Germain star suffered an ankle injury as his country defeated Serbia 2-0 in their opening World Cup game on Thursday. Tottenham striker Richarlison scored a brace, but the entire country will be left sweating on the fitness of their talisman.

Neymar went down after a heavy tackle, which was the ninth time he had been fouled all game as he became the most fouled player at the World Cup in Qatar, and limped off the bench before he was visibly upset and had to be consoled by his team-mates and members of the Brazil staff.

Photos emerged of the forward’s ankle that suggested he may miss Brazil’s next game against Switzerland on Monday, while Get French Football News claimed that the 30-year-old suffered a twisted ankle.

Brazil’s team doctor confirmed to The Independent that Neymar has “trauma” to his ankle and needs 24-48 hours to be assessed. He was spotted hobbling through the mixed zone after the game, where he did not speak with the media and was shielded by his team-mates.

BBC pundit Micah Richards admitted it would be a worry for Brazil if they had to go without Neymar for the tournament.  “We talked about how this could be his competition,” Richards said.

“You know, him in the form of his life this season, but when he does go down [like tonight] it is a worry. Hopefully it’s not anything too serious, but you don’t want your main man injured, especially in the first game.”

Neymar has had a history of ankle injuries that has hampered his availability with PSG and Brazil that will not ease any concern in the Brazilian camp.

His team-mate Raphinha went one step further and stated that Neymar would play against Switzerland. “Neymar is doing well and will play in the next match,” the Barcelona winger claimed.