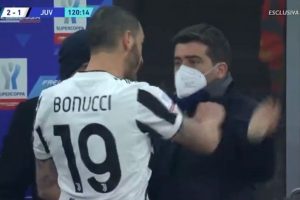 Juventus ace Leonardo Bonucci could be in hot water after being caught in a furious bust-up with Inter Milan secretary Cristiano Mozzillo in the wake of Inter's dramatic last-gasp victory in the Italian Super Cup final.

Bonucci was waiting to be introduced from the sidelines for a penalty shoot-out with the scores level at 1-1.

But Sanchez struck in the 120th minute to clinch the Supercoppa for Inter.

The Chilean's late strike sparked jubilant scenes on the pitch – but also chaos on the sidelines.

Bonucci was left furious after and took out his frustrations on Mozzillo, with a new report from Il Tempo revealing what was said to spark the fiery clash.

The Italian defender shoved Mozzillo and, according to the report, went on to warn the Inter employee by saying: “You don’t celebrate to my face, what the f*** are you doing? I am going to kill you!”

Mozzillo replied, “What are you doing?” and tried to move Bonucci away.

Luckily, the ugly scenes didn't escalate any further, but federal investigators are expected to dig into the confrontation, which could see Bonucci slapped with a ban.

What did you make of the Italian Super Cup final? Let us know in the comments below

With Juventus desperate to bring on the 34-year-old for the penalty shoot-out that seemed to be inevitable at the time, staff had been encouraging players to deliberately put the ball out of play to allow the substitution to be made.

But the plan backfired after Sanchez pounced on a mistake from Alex Sandro to cap a frantic finale.

Juventus boss Massimo Allegri has urged his team to use their late heartbreak as the driving force in their Serie A title bid.

“It was a real game, a good test for us to see where we are. Unfortunately, football sometimes feels like it was invented by the Devil,” Allegri told Sport Mediaset, per Football Italia.

“We made a naïve mistake five seconds from the end, but played against the strongest team in Italy at the moment and had several chances, allowing Inter very little. We struggled in the opening 10 minutes, but then did really well.”

“A defeat five seconds from the end hurts, but we need to use that anger for Serie A, the Coppa Italia and the Champions League.

“We need to look at the positives, the team is improving, especially physically. It was a one-off game, it didn’t go the way we wanted, so now we focus on the league.”