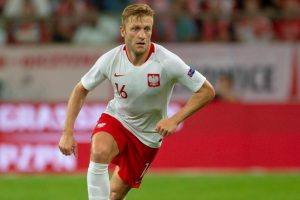 Polish superstar Jakub Blaszczykowski played for Poland to make his mum proud after a harrowing family tragedy shaped his life as just a 10-year-old.

Blaszczykowski and his brother witnessed their dad stab their mum to death after a heated argument. The future Polish international never spoke to his dad again, who was sentenced to 15 years behind bars, however, he did attend his funeral.

Speaking years later, he said: "It’s not easy, but it’s an episode I haven’t forgotten and will never forget; that day, my life was changed forever. But I think it also gave me lots of strength.

"I’ve had to deal with so many adversities in my life, that others would never have been able to. Earlier in my life, it was something I never wanted to mention.

I tried to forget it but I couldn’t. But now I am mature enough to speak about it. Until the end of my lifetime, I will have to live with this.

"My mother is looking after me. I have had some difficulties in my life but I have overcome all of them and I feel it is because she is somewhere and helps me. Without her, I could be on the wrong way in my life. I try to make her proud because she did great things for me and my brother."

Blaszczykowski goes into even more harrowing detail in his autobiography – where he recalls his mum dying in his arms.

The winger was so traumatised by the events he refused to leave his bed for five days, and when he did it was to leave Katowice, the small village he had called home, permanently to live with his grandparents. Blaszczykowski's story gained worldwide attention in 2012.

Poland was the co-host of Euro 2012, and Blaszczykowski was one of the stars of an exciting young Polish side.

The 36-year-old hasn't played for his national side since 2019, but he's continued his stellar club career in Germany, only moving back to Poland in 2019.

Blaszczykowski still turns out for Wisla Krakow – where he is now a part-owner of the club.