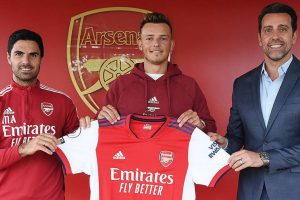 Arsenal have completed the signing of Ben White from Brighton & Hove Albion for a fee of around £50million.

The 23-year-old centre-back leaves the Seagulls after a breakout season where he impressed in 36 Premier League appearances with his solid defensive work and ball-playing ability.

Mikel Arteta’s side managed to meet Brighton’s valuation of the player after their initial offer of £40million was rejected and details surrounding add-ons were discussed.

White, who has penned a five-year contract until 2026, will bolster the Gunners’ defensive options ahead of the new season as they look to reclaim a European spot after a disappointing 8th place league finish.

The Englishman is known for his calmness in possession and ability to play long raking balls out to the channels, which the likes of Bukayo Saka, Kieran Tierney and Pierre Emerick-Aubameyang will thrive on.

White will likely partner Gabriel at centre-back with the newcomer occupying the right-sided role.

He will replace Rob Holding in that birth despite the Arsenal man's solid contributions last season which saw Arsenal only concede 39 goals, the third best record in the league.

Do you think Arsenal will splash out a rumoured £150million this summer on players? Let us know in the comments section.

But White suits Arteta’s plans more in an attacking sense which justifies the hefty sum paid for a player with only one season of top flight football under his belt.

The arrival raises questions about the future of 20-year-old William Saliba at the club whose Arsenal career looks in doubt.

The highly-touted youngster arrived for £27million but is yet to feature under Arteta after being sent back on loan to Saint-Etienne and then Nice last season.

It is unclear how Saliba will usurp Arsenal’s new man and Holding, although Arteta ruled out a permanent move away for the Frenchman last month.