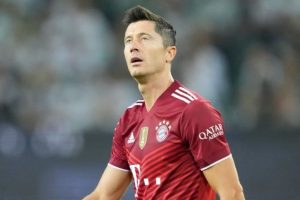 Robert Lewandowski: All you need to know about Polish striker

Bayern Munich may risk upsetting Robert Lewandowski by denying him a departure in the next year. According to Sky Sports, the 33-year-old is eyeing a new challenge before he turns 35, with Real Madrid linked as a ‘dream’ destination in the past.

Lewandowski is happy at Bayern but wants to join another top European club before turning 35 in August 2023.

The Poland international turns 33 on Saturday and may feel he has one big contract left in him.

But Bayern value him at £100million, which is likely to fend off suitors this summer and next if that fee isn’t cut down.

Lewandowski isn’t willing to risk damaging his relationship with the Bundesliga giants and their fans, so he’s unlikely to push for an exit.

However, he’ll be nearing 35 once his Bayern contract expires in 2023, which could make it challenging to secure the big move he craves.

It’s no surprise that new manager Julian Nagelsmann won’t want him to leave after scoring 56 goals for club and country last season.

If the Bavarian club price suitors out of a move for Lewandowski beyond this summer, denying him a ‘dream’ move in the process, the situation could be at risk of turning toxic.

The FIFA and UEFA Player of the Year is already ‘frustrated’ by Bayern’s reluctance to sell him.

Lewandowski has got off to a characteristically strong start to the new campaign, scoring three goals in his opening two games.

Last weekend, he netted the equaliser in Bayern’s 1-1 draw at Borussia Monchengladbach to kick start the Bundesliga season.

On Tuesday, the veteran striker helped Bayern defeat Borussia Dortmund in the DFL-Supercup as he scored twice in a 3-1 win at Signal Iduna Park.

Lewandowski scored Nagelsmann’s side’s opening and third goals as the German lifted his first piece of silverware as boss.

The list of clubs interested in his services is likely to include Manchester City, Manchester United, Paris Saint-Germain and Real.

If Pep Guardiola can’t lure Harry Kane from Tottenham Hotspur this month, he may pursue a reunion with Lewandowski at the Etihad Stadium.

Man United need a replacement for Cavani next summer and could look to sign the former target over Erling Haaland.

With Kylian Mbappe’s PSG future uncertain, the French giants could bring in Lewandowski as a replacement to add to Mauricio Pochettino’s all-star attack.

Mbappe, like Lewandowski, wants to secure his own ‘dream’ move to Real, which could ultimately hold significant bearing over the latter’s future.