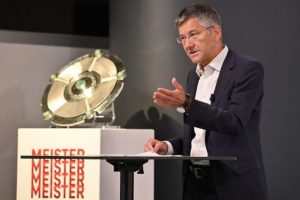 Bayern Munich chairman Herbert Hainer has potentially opened up the door for a move for Robert Lewandowski. The Poland international is said to be looking for a new challenge, with Manchester United and Manchester City both linked to the striker.

Bayern chief Hainer has revealed that there are currently no plans to open contract talks with star striker Lewandowski.

The 33-year-old’s contract is now into the final two years, and it is notoriously harder to negotiate the deeper a player gets into their deal.

Lewandowski remains a core part of the Bayern set-up, having scored 48 goals in just 40 games last season in all competitions.

Sky Sports News claimed earlier this week that Lewandowski is looking to leave the club as he seeks a new challenge before he hangs up his boots.

Bayern are believed to value him at more than £100m, despite being well into his thirties.

But his value is sure to diminish the shorter the length his contract becomes, and Hainer appeared to be in no rush to get new terms on the table.

He told BILD TV: “We’re happy with Robert. But we don’t have to extend the contract now, we still have 2 years.

“As I said, I can imagine Robert staying beyond 2023. We’re in permanent talks with all our players, including Lewy. But now is still early.”

That means that if Lewandowski does not sign a new contract by next summer, he will surely be available for a cut price.

That may prompt a scramble from Manchester rivals City and United, who are both looking to sign a new striker, but are in no rush to get one in this summer.

Were Lewandowski not agree a new deal by January 2023, he would be available to foreign clubs for free.

City boss Pep Guardiola does not seem to be looking into a deal for Lewandowski at this time, admitting he thinks he will stay in Germany for the time being.

“I’m not going to talk with 11 days left about the transfer market. I don’t know what’s going to happen, nobody knows.”