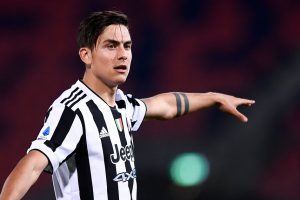 Barcelona are reportedly interested in signing Paulo Dybala in a swap deal which would send Antoine Griezmann to Juventus.

Barca are in a mess financially and are desperately trying to offload some of their biggest earners just to register new players.

Ronald Koeman’s side have announced the signings of Memphis Depay, Sergio Aguero and Eric Garcia, while Emerson Royal has returned from a loan spell, but the club cannot officially register them due to their financial predicament.

Similarly, Barca have reportedly agreed a new five-year contract with Lionel Messi, yet he officially remains unattached because of their salary cap problem.

They need to get around £171m (€200m) off their wage bill this summer just to continue functioning.

That is where Griezmann comes in. Although the French forward is not one of the club’s top earners, he is considered an expendable asset in the race to register Messi and the new arrivals.

A return to Atletico Madrid, as part of a swap for midfielder Saul Niguez, had previously been mooted butL’Equipenow reports that there is another option.

Griezmann has three years left to run on his £300,000 per week contract and Barca would like to move him on, along with fellow high earners Philippe Coutinho and Ousmane Dembele.

The 30-year-old forward is reportedly ‘tempted’ by a return to Atletico, but Juventus could prove a more likely destination.

Barcelona would ‘welcome’ Griezmann’s exit and have asked Juve for a player in exchange.

The Italian side have suggested Dybala, who has entered the final 12 months of his contract and endured a mixed 2020/21 campaign.

The two clubs have history when it comes to pulling off such a deal, with Barca midfielder Arthur Melo swapping places with Miralem Pjanic last summer, partly to balance the books.

Griezmann joined Barcelona on a five-year deal in July 2019 after the club triggered his £107m (€120m) release clause at Atletico.

He scored 20 goals across all competitions last season, but with the club desperate to meet La Liga’s salary cap and Aguero and Depay arriving to play alongside Messi, it seems he could be forced out this summer.