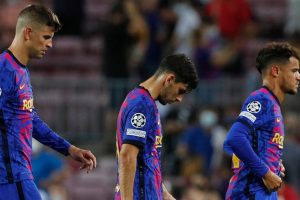 Barcelona broke an unwanted club record during their 3-0 defeat to Bayern Munich in the Champions League on Tuesday evening, rounding off a disappointing night for the Catalan giants.

Ronald Koeman's team failed to register a single shot on target during the entire 90 minutes; this is the first time ever a Barcelona side has managed this in the Champions League.

The five-time competition winners were humbled on their own patch by a rampant Bayern side who peppered the opposition goal all evening, with a 3-0 scoreline flattering Barca.

While pressure is increasing on manager Koeman, the stark reality of life without star man Lionel Messi becomes evermore apparent.

The six-time Ballon d'Or winner departed for PSG in the summer after the club were unable to re-sign the 34-year-old due to their catastophic financial situation.

All of Barcelona's summer transfers were free agents, barring Emerson Royal who was later flogged to Tottenham.

And with an injury crisis hitting the squad in the last couple of weeks, the La Liga giants were missing Ansu Fati, Sergio Aguero and Ousmane Demebele on Tuesday evening.

Is Ronald Koeman the right man for Barcelona? Let us know in the comments section.

It meant that Barca ended the night with six players under the age of 23 on the field.

Whilst Bayern Munich were able to call upon the likes of Serge Gnabry, Leroy Sane and Marcel Sabitzer, Koeman had to resort to playing the kids.

It was an embrassing night all round for the former Everton and Southampton manager who cited injury problems as the reason for the crushing defeat:

"Of course we would have liked to compete better but there is a difference in their quality as a team [and ours],' said Koeman in his post-match press conference, as reported via The Daily Mail.

"There was a big difference between the benches too. We have lots of players with a big future but right now we need players back from injury."