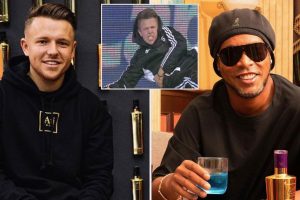 The ball boy who was infamously booted by Eden Hazard is now a millionaire with a vodka empire that includes Ronaldinho amongst their clients.

Charlie Morgan was kicked by then Chelsea winger Hazard whilst laying on top of the ball during the 2013 League Cup semi-final second leg between Swansea City and the Blues. Having made headlines with his antics at the time, Morgan has since gone on to launch a successful business career with Au Vodka, alongside ex-schoolmate and business partner Jackson Quinn.

The former Brazil playmaker has posed gleefully on social media whilst pouring himself a glass of the beverage, which is instantly recognisable with it's flashy gold bottles and eye-catching flavours.

Rapper Fredo and former Radio 1 Xtra DJ Charlie Sloth have both appeared on Morgan's own Instagram with Au Vodka in the past. Sloth himself has even invested in the business after being impressed when given a free bottle to taste by Morgan and Quinn.

Who will win the League Cup this season? Let us know in the comments section below

The success of Au Vodka has seen Morgan make his way onto the Sunday Times Rich List with an estimated net worth of £40million.

Speaking to WalesOnline in August last year, Morgan reflected on his achievements, explaining: "It’s almost hard to take a moment to reflect when we have the next big project coming up and there is always something new we’re working on.

"But, looking back on how far we have come, it’s been such an immense journey with plenty of milestones hit and definitely so much more to come."

Back in January 2013, a then 17-year-old Morgan frustrated Chelsea players with his time-wasting antics as a ball boy for Swansea, who include his dad Martin on their board of directors.

His behaviour caused an angry Hazard to boot the ball out from under him at one point, leaving Morgan wincing in pain and the Belgian midfielder being sent off in one of the League Cup's most viral moments ever.