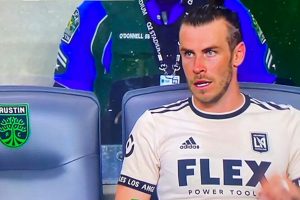 Gareth Bale's MLS spell has gone from bad to worse and it is quickly turning into a disaster after another shoddy performance for Los Angeles FC.

The Wales international was hoping for a last hoorah in the United States where he could strut his stuff without the unrelenting eye of Madridista media following him. However, his problems have followed him across the pond where he continues to struggle.

After nine years with Real Madrid – that included a year loan back at Tottenham – a move to Los Angeles FC appears to have failed after making just two starts in two months.

His latest outing ended miserably, coming off after 61 minutes with LAFC 1-0 down to Minnesota. To make matters worse, Carlos Vela scored the equaliser just a few minutes after Bale left the pitch.

While the first month of Bale's arrival saw him building up his fitness after joining midway through the MLS season, LA boss Steve Cherundolo gave him his full debut on August 26.

Will Gareth Bale be a success in the MLS? Comment below

It was a disaster, Austin beating the Californian outfit 4-1 with the 33-year-old coming off after an hour. It means that the forward has yet to complete 90 minutes since making the move to the United States with AS reporting that Cherundolo does not trust him to last a full 90 minutes.

When asked last month why he would not start Bale, the LA coach said: “Every game’s decisions and factors we have leading into our decision-making to who’s starting or coming off the bench, one affects the other and vice versa. We approach every game differently."

In Wales, there is hope that Bale does not pick up an injury ahead of their first World Cup in 56 years this winter. However, they might have new concerns that he arrives at Qatar woefully out of form.