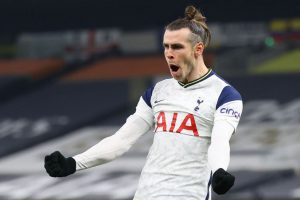 Gareth Bale expects to return to Real Madrid next season and become a key figure at the Bernabeu again, according to reports in Spain.

Bale has spent the 2020/21 campaign on loan at Tottenham, heading back to his former club after falling out of favour under Zinedine Zidane at Madrid.

The Welshman has struggled for consistency since returning to north London, although a return of 14 goals in 31 games means he is on course to produce his best goalscoring tally since 2017/18.

And according to AS, Bale believes he has done enough to work his way back into the Madrid side next season.

It is understood there is no option-to-buy clause included in his loan contract at Spurs, which means the club would have to negotiate a new deal with Los Blancos to keep him.

His £13million-a-year wages, which Spurs have paid half of this season, would also prove a major stumbling block in any attempt to re-sign him on a permanent basis.

Bale is determined not to see his pay drop, and his future will reportedly be influenced by current Los Blancos manager Zidane.

The 31-year-old has endured a rocky relationship with Zidane in both of his stints as Madrid boss, meaning it's difficult to envisage him returning to become an important member of his squad.

However, Goal are reporting that several Madrid players fear Zidane could walk away from the club this summer, despite his contract running until 2022.

There is a growing feeling within the camp that the Frenchman is growing tired of dealing with events outside of his control, such as injuries, intense fixture scheduling and criticism from the press.

His potential departure would be music to the ears of Bale, who would reportedly be 'delighted' to end his career with the Spanish club.

Bale still has a year remaining on his current contract at Madrid, where he has spent the last eight years since departing Spurs for a then-world-record £90million.

READ MORE:Tottenham may turn to boss Daniel Levy was 'desperate' to sign before Jose Mourinho