Babbel cited for second time in a month for referee comments

Western Sydney coach Markus Babbel has been cited by Football Federation Australia for his comments after the club's A-League defeat to Wellington Phoenix.

Babbel claimed the Wanderers were playing against 12 men in the 2-1 defeat to Phoenix on Saturday, a day after the Western Sydney coach had been reprimanded by FFA for a blast at match officials following their loss to Melbourne City. 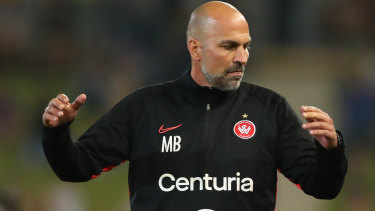 Wanderers coach Markus Babbel has fallen foul of FFA for the second time in under a month.Credit:Getty Images

Babbel was incensed after referee Daniel Elder awarded Phoenix a late penalty for a perceived handball by Pirmin Shwegler in the Wanderers box, which Ulises Davila converted to seal victory for the hosts.

"You can't tell me this is bad luck," Babbel said at the post-match conference. "This is too often now, too often against us, and there's something behind it, that's my opinion.

"We have to understand that we play not against 11 but against 12 – this is a trend now. I really feel sad for the boys but it is like it is and we have to work harder."

Babbel, who is facing intense pressure to keep his job, has until 5pm (AEDT) Monday, to provide a submission.

The comments came barely 24 hours after he received a formal reprimand for swearing in a press conference.

Last month, Babbel took exception to questioning about a contentious penalty given by referee Chris Beath in the Wanderers' controversial A-League loss to Melbourne City.

Beath awarded City a penalty after Wanderers midfielder Schwegler was ruled to have pushed Denis Genreau.

Babbel apologised after the incident, but could not guarantee that there would not be a repeat offence.

"Swearing in front of the cameras is never good, I'll try to do it better in the future, but I can't promise you."

Wanderers are sixth in the table on 10 points. The side won their first three matches of the season, but since then have just a single point, including losing their last four matches.

Babbel's men have lost four matches in a row, with mounting speculation the former Liverpool defender could soon lose his job.