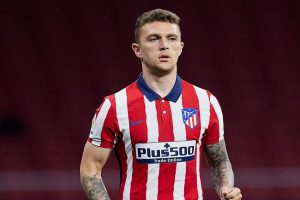 Arsenal have emerged as possible rivals to Manchester United for the signing of Kieran Trippier in the upcoming summer transfer window.

The Gunners will be in the market for a new right-back, with Hector Bellerin expected to leave the Emirates Stadium having fallen out of favour under Mikel Arteta.

The 26-year-old has been the Gunners’ first-choice in the position for much of his decade-long stay at the club, but has found playing time hard to come by since the end of February.

His contract still has two years left to run, but it appears that Arteta believes he needs an upgrade at the right-back position as he looks to turn the team around following a disappointing season.

It seems that upgrade could come in the form of Trippier, who is believed to be ready to return to the Premier League.

The 30-year-old has enjoyed a successful two-year spell at Atletico Madrid, becoming the first-choice right-back at the club.

He made 28 appearances and notching six assists this season as Diego Simeone’s side won La Liga for the first time in seven years.

Trippier’s impressive performances have already drawn the interest of United, who are looking to bring in competition for Aaron Wan-Bissaka.

But it appears that Arsenal could present a better deal to Atletico, with Marca reporting that the Spanish side are considering a swap between Trippier and Bellerin.

It is stated that Bellerin is seen as the ideal replacement for Trippier, with Sime Vrsaljko not able to deliver the standard demanded by the La Liga champions.

The Spanish news organisation state that Atletico technical director Andrea Berta is a fan of the Arsenal star and has had “discussions” with the 26-year-old.

They believe that Bellerin would “fit in perfectly” under Simeone and is a proven performer at the higher levels of the game.

With the competition for Trippier’s signature, Marca also claim that while a swap deal is being considered, Atletico could also simply just make a simple move for Bellerin if the Englishman joined United.