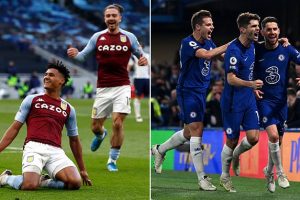 Aston Villa vs Chelsea LIVE: It’s sink or swim time for Thomas Tuchel’s Blues as they take on the Villans in a HUGE match as the race for the Champions League places goes down to the final day

Chelsea take on Aston Villa this afternoon in a crucial match that will determine whether or not they finish in the top four.

The race for the Champions Leagues places has gone right down to the wire with Chelsea, Liverpool and Leicester all scrapping it out for two spots on the final day of the season.

Thomas Tuchel’s men can book their place in next season’s competition by beating Villa while a draw or a defeat could still be enough depending on how Liverpool and Leicester fare.

Villa will just be playing for pride, having already cemented their position in 11th, but will relish trying to spoil Chelsea’s day.