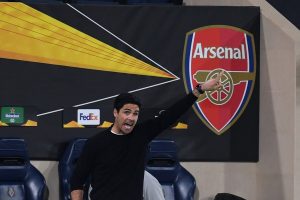 Well, we finally have it. After an array of questionable framing and forced situational jeopardy, next Thursday will unequivocally be the biggest match of Mikel Arteta’s tenure as manager of Arsenal.

That is until they make it to the final, which for large parts of the first leg of their Europa League semi-final looked as dead a prospect as the European Super League. But, a 2-1 scoreline courtesy of Nicolas Pepe’s away goal felt like a defeat in the record books alone at this juncture. The ashen faces of the Villarreal players as they left the pitch told the story. After a high-stakes, low-quality affair, there were no real winners.

To say Arsenal got lucky would be no overstatement, even as they wake up on Friday with plenty to rectify. In the way that you might be fortunate getting from one side of a main road to the other without looking up from your phone, quite how the tie remains in the balance – even slightly shifted in favour of The Gunners – is remarkable. They were disorganised, offered little threat, as per their 0.4 expected goals from open play, and provided Villarreal ample room that should have made the second leg at the Emirates Stadium obsolete.

The shift – and yes, going from neutral to first gear is still a shift – was instigated by the players. They reacted to going down to 10 men with 33 minutes to go by putting more emphasis into their attacks. And when it came to holding on, defiance was not pretty but a hell of a lot more effective than the opening half-an-hour.

Luckiest of all was Arteta. Because the decisions he did and did not make, before and during the match, almost cost his team dearly.

Implementing a strikerless formation for such a crucial match was peculiar given it is a system Arsenal have not played under him before. Emile Smith Rowe, operating further forward than he is used to, was ineffective. His usual flow of movement was stifled within such defined parameters, not least because he now had to be wary of stepping on Martin Odegaard’s toes. The same restriction applied to the Norwegian, and arguably the pair might have been better off if their roles were swapped. Or if Arteta used one of the three strikers he’d taken to Spain.

He was passive in his dealings with Dani Ceballos, who should have been hooked at half-time after his caution late in the first half – maybe even replaced in the middle by Granit Xhaka with Cedric Soares installed at left-back. The Spanish midfielder lasted just 12 minutes after the break before clumsily treading on Dani Parejo’s ankle. Arteta relayed at the end of the match that Gabriel Martinelli was due to replace Ceballos before the second yellow. But that only served to underline the fact that he delayed making the right decision twice.

His blushes were saved by Bernd Leno’s brilliant reflex stop to prevent Gerard Moreno from making it 3-0 after Ceballos’ red. Then again when Manu Trigueros kicked out at Bukayo Saka in the box, who had the presence of mind to leave his right leg trailing as bait. Even the resulting spot-kick from Pepe grazed the toenails of goalkeeper Gerónimo Rulli.

You might argue he was also lucky to have Unai Emery in the opposing dugout. Those Arsenal fans who spent Emery’s final days at the Emirates lamenting his conservative ways were gleeful that he stuttered through the second half, unable to take advantage of a two-goal lead and an extra man. It says a lot that his decision to replace forward Paco Alcacer at half-time with former Gunners defensive midfielder Francis Coquelin is up there as one of the more peculiar selections of the match.

We are reaching a stick-or-twist moment with Arteta. Not so much on his employment per se, especially with the Kroenkes seemingly satisfied with the status quo after having their fingers burned with the ESL. But certainly when it comes to being another personality that will split the fanbase into two distinct “in” and “out” factions.

Lauded as a student of Pep Guardiola, so far the only pronounced trait they share is a knack of overthinking. Lauded when he arrived as a mind that sees the bigger picture, he has shown flashes of unproductive short-sightedness, the latest being this first leg.

His post-match press conference was notably prickly. “Obviously when you lose you always get it wrong,” he retorted ironically when his team sheet was called into question.

“It’s the way we prepared the game, it’s the decision that I made thinking that it was the best way to play but the game was conditioned after four minutes,” came his stern reply when asked of the system to play without a frontman.

His defense of Xhaka at left-back was also delivered matter-of-factly, with a reasonable amount of shade: “Guys, when we won 4-0 away to Slavia Prague [after] they didn’t lose a home game in three years and Granit played so well, it was incredibly well playing there. But I know when that doesn’t happen it’s always going to point there.”

The pressure is clearly getting to him, which is not to say it shouldn’t. In less than a week he takes charge of his most important engagement as a coach. One that will, rightly or wrongly, colour him not just at Arsenal but wherever the future takes him.

The six days between now and the second leg is time for players to heal up, others to come back into contention and, crucially, assess how to finish off a fallible Villarreal who will rue not putting this all to bed. Next Thursday is a big day for Arsenal, but a bigger one for Arteta.