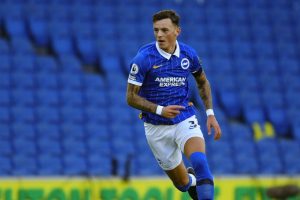 Ben White is on the verge of completing his £50million transfer from Brighton to Arsenal, putting the Gunners one step closer to finalising their summer squad overhaul.

White has completed his medical with Arsenal this week after returning from a holiday following involvement with England at Euro 2020.

Arsenal entered negotiations with Brighton at £40m for the highly-rated centre-back but have eventually agreed a £50m fee with the Seagulls.

That fee will make White Arsenal’s third most expensive signing of all-time, so will he live up to the billing?

A look at the Gunners’ top 10 transfers gives an idea of the kind of pressure that will be on White’s shoulders.

The tenacious central midfielder joined Arsenal from Sampdoria in July 2018 under Unai Emery.

He’s made 63 Premier League appearances over the last three seasons, but is now firmly on the fringes of the squad.

Torreira spent last season on loan with Atletico Madrid and looks likely to leave the club again this summer, be it on loan or on a permanent transfer.

Saliba was signed from Saint Etienne in July 2019 before going straight back on loan to the French club.

Another loan spell with Nice followed last season and Saliba will play for Marseille in the 2021/22 season.

The 20-year-old centre-back is yet to make a first-team appearance for the Gunners, but his impressive displays with Nice during the second half of the last campaign showed he has the talent to live up to his transfer fee.

The Swiss midfielder joined Arsenal from Borussia Monchengladbach in May 2016 and has been a regular in the team ever since.

While he has a mixed reputation, following some high profile errors and public falling out with fans, Xhaka has been a solid performer in general over the past five years.

A summer exit to Roma looks likely and, once it is confirmed, supporters might reflect on his contributions more positively.

Back in August 2016 the Gunners signed Mustafi from Valencia in a big-money move.

The German international arrived with a decent reputation but unfortunately it failed to work out for Mustafi.

He made 141 appearances across five years with Arsenal, yet his legacy is not a positive one. Mustafi slipped out the back door to Schalke in February on a permanent transfer and won’t be missed in north London.

Sanchez was a huge signing and statement of intent from Arsenal, arriving from Barcelona in July 2014.

The Chile forward scored 47 goals in 141 appearances for Barca and has arrived after netting two goals in the World Cup in Brazil.

He did not disappoint, either, scoring 80 goals in 166 appearances for the club before moving to Manchester United in a swap deal with Henrikh Mkhitaryan.

Will Ben White live up to his £50m price tag at Arsenal? Have your say in the comments section below.

One of Arsenal’s greatest ever signings, no doubt. Ozil contributed so much to Arsenal following his big-money move from Real Madrid in September 2013.

The German playmaker was, for a few seasons, one of the Premier League’s best players and the final few years of his Arsenal career should not take away from his early achievements.

Ozil scored 33 goals and registered 54 assists in 184 Premier League matches before leaving for Fenerbahce in January.

The most recent of Arsenal’s expensive signings, Partey signed from Atletico Madrid in October 2020.

The Ghana international’s first season at Arsenal was seriously interrupted by injuries, with Partey unable to fully show his talents during 33 appearances so far.

The 28-year-old midfielder is yet to fire, but the Gunners will be hoping he comes good in the 2021/22 campaign.

Lacazette signed for Arsenal from Lyon in July 2017 and has scored 65 goals in 170 appearances since.

The Frenchman has generally been a reliable goalscorer for Arsenal over the last four years, without really exploding into huge numbers.

Aubameyang was a real coup for Arsenal when they landed him from Borussia Dortmund in January 2018.

At the time the Gabon forward was one of the hottest players on the market, having scored 134 goals in just 201 appearances for Dortmund.

He has been a major player for Arsenal since arriving, without really hitting the same heights as in Germany.

Made captain by Arteta, Aubameyang is Arsenal’s first name on the team sheet.

Arsenal’s record signing, way out in front of the others. Pepe arrived from Lille in August 2019 after lighting up Ligue 1 with 23 goals and registering 12 assists in 41 games in 2018/19.

It is fair to say that Pepe has so far failed to live up to his price tag. There have been flashes of his talent on the wing and some eye-catching goals, but his inconsistency has been notable.

Pepe managed 10 goals and one assists in 29 Premier League matches last season and will be hoping to kick on further in 2021/22.