Arsenal’s potential line-up next season with White, Maddison and Abraham 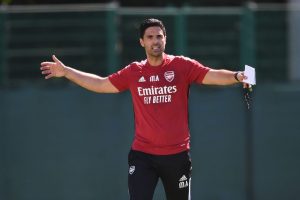 Arsenal’s transfer business is stepping up, with Mikel Arteta chasing several targets to be his third signing of the summer window.

Nuno Tavares and Albert Sambi Lokonga have both already joined the club, with the Gunners closing in on finally bringing Ben White to the Emirates Stadium.

Arteta is also eyeing bids for Aaron Ramsdale and Tammy Abraham, with the Gunners also reportedly ready to offer two players to Leicester in part-exchange for James Maddison.

The Spaniard’s starting line-up in the upcoming season is set to be much changed from the one which finished eighth in the Premier League last term.

Those changes will start with the first name on the teamsheet in goal, with Ramsdale taking over as number one from Bernd Leno.

The Gunners are set to submit a £30million bid to Sheffield United for the Englishman, who has impressed at the Blades.

Following his starring role in England’s run to the Euro 2020 final, Bukayo Saka will be handed the starting role at right-back as Arteta looks to inject more creativity to his side.

Inside Saka will be £50m man White, who is closing in on his much-anticipated move from Brighton and will immediately become one of Arsenal’s first choice centre-backs.

Are you happy with Arsenal's transfer business so far? Comment below.

Playing alongside White will be Rob Holding, who was one of Arsenal’s most consistent performers last season.

Despite Tavares’ arrival from Benfica, Kieran Tierney is still the first-choice left-back and appears set to become Arsenal captain at some point in the future.

Thomas Partey will also keep his starting role in defensive midfield despite a mixed first season at Arsenal following his move from Atletico Madrid.

It is hoped that a new partner will bring the best out of the Ghanian and Arteta hopes Lokonga can be that man after his arrival from Anderlecht.

The 21-year-old has impressed in Belgium, making 78 appearances for Anderlecht since his debut in December 2017.

With Emile Smith-Rowe now likely to stay at the Gunners, Arteta will hand him a starting spot out wide.

Playing as the central attacking midfielder in Arteta’s 4-2-3-1 formation would be Maddison, with the Englishman having starred for Leicester since his move from Norwich.

Maddison has scored 21 goals and notched 17 assists in three top-flight seasons with the Foxes, with Arteta marking him out as the man to be the Gunners’ creative force.

On the opposite flank to Saka will be Pierre-Emerick Aubameyang, who will hope last season’s downturn in form was merely a blip.

With Aubameyang back in his favoured position on the wing, Abraham will lead the line as the sole striker.

He is reportedly set to make a loan move from Chelsea, having fallen out of favour at the Blues despite being their most consistent goalscorer of recent seasons.