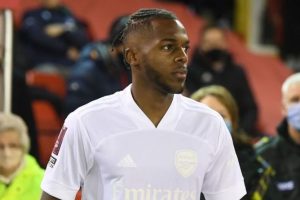 Lazio want to sign Arsenal full-back Nuno Tavares on loan with an option to buy, according to reports in Italy. The 21-year-old has only been at the club six months after arriving from Benfica for £8million last summer but the player is already attracting interest from Italy.

Tavares has largely impressed since completing his switch to north London, even keeping Kieran Tierney out of the side earlier in the campaign.

Yet the Scot soon reclaimed his starting berth as Mikel Arteta welcomed the healthy competition at left-back.

The Portuguese star was reinstalled to the starting line-up last weekend in the FA Cup defeat at Nottingham Forest but it turned out to be an afternoon to forget.

He was dragged off by Arteta after a dismal 33-minute cameo – before throwing his gloves in a strop as he stormed his way to the bench.

Arteta considers the case closed on his part and has been impressed by Tavares’ response in training.

However, according to Italian outlet La Gazzetta dello Sport, Lazio are now considering a bid this January.

The Italians ideally want to take Tavares on loan with a view to signing him permanently at the end of the season.

Arsenal fought off a number of clubs to sign Tavares last summer and they are highly unlikely to entertain offers this early into his Gunners career.

Speaking on Wednesday morning, Arteta clarified that there is no bad blood between him and Tavares, shedding further light on his decision to substitute the defender so early in the game.

“That these things happen in football and I’m there to make the right decisions to try to get the best performance out of the team,” Arteta said.

“It’s not pleasant to make those decisions, it leaves you a bad taste, but at the same time we are here to help our players.

“And to help our players we have to do it in many different ways and hopefully that’s a way, because certainly we want to support our players, we want to help them, and the fact that you have to make a decision on a day, it might give them more encouragement to help them.

“Because I’ve been there, I’ve been substituted after 45 minutes and I’ve been upset and I have made wrong decisions in my life.

“It’s part of a process and a development phase in any career and it’s part of experiences and some experiences unfortunately don’t have to be pleasant.

“But most of those you take in the right way, they are really the ones to help you progress and become a better person and player.”

Tavares could feature for Arsenal on Thursday in their Carabao Cup semi-final clash with Liverpool.