Match report as Beth Mead’s 86th-minute opener is cancelled out by Lotte Wubben-Moy’s own goal to ensure Chelsea remain two points behind Arsenal in WSL; Chelsea sit third – three points off leaders Man Utd but with a game in hand 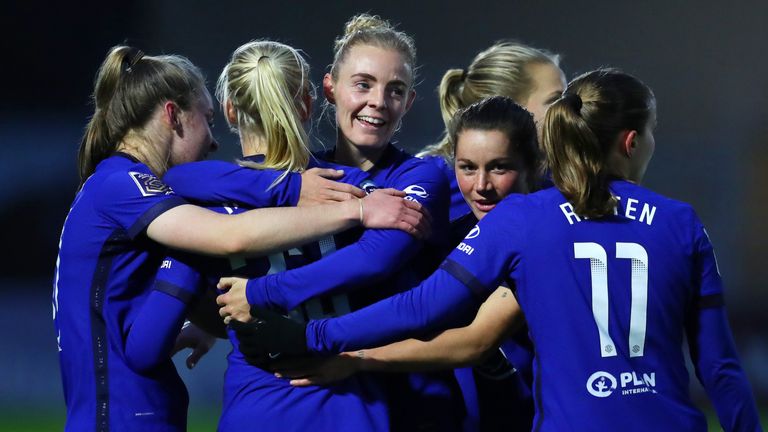 Arsenal were denied top spot in the WSL after a 90th-minute own goal from Lotte Wubben-Moy salvaged a 1-1 draw for Chelsea at Meadow Park.

Beth Mead looked to have ended Arsenal’s six-game losing streak against Chelsea when she met Vivianne Miedema’s cross to tap the hosts in front with four minutes of normal time remaining.

But Emma Hayes’ side responded almost immediately as Pernille Harder’s cross from the right looped off Wubben-Moy and deceived Manuela Zinsberger to find the far corner of the net.

The result ensures Manchester United remain top of the WSL, a point ahead of Arsenal having both played seven games, while Chelsea sit third – three points off the leaders but with a game in hand. It was hard luck on Joe Montemurro’s side after they deservedly broke the deadlock so late on in a cagey contest.

Arsenal hammered their London rivals a couple of years ago, but the Blues entered the contest having won all six of the subsequent meetings, including a 4-1 victory in the Continental Cup last month.

Arsenal were boosted by the return of Kim Little, and it was they who had the best chance of the first half as Caitlin Foord remarkably saw her curled right-foot shot strike the bar before the ball landed back on the woodwork a second time in the closing stages of the opening period. 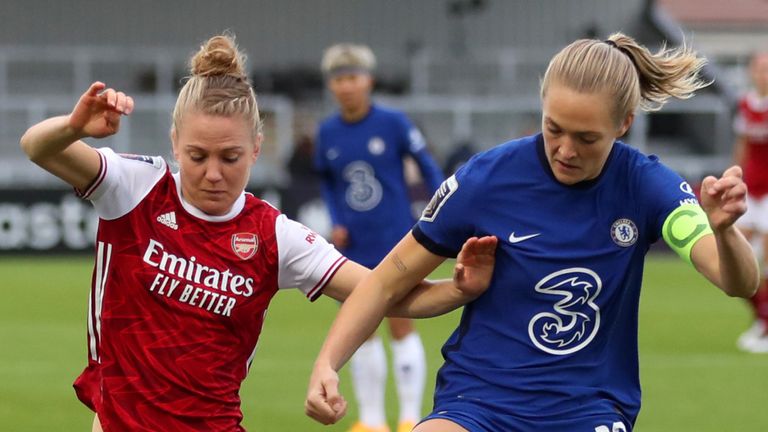 But Hayes injected greater urgency into her side following the restart as Beth England missed two presentable chances as Arsenal nearly paid the price for overplaying out from the back, slicing the best of those efforts over.

Leah Williamson then denied Harder with a vital block from close range following good work from Ji So-yun down the right before Arsenal began to dominate as the pendulum swung back in favour of Montemurro’s side.

Arsenal were without key first-team players Jordan Nobbs, Steph Catley and Jen Beattie but were able to include Lisa Evans on the bench after a knock.

Chelsea stuck with Beth England up front instead of Sam Kerr, who was named on the bench, after the Lionesses striker netted a brace last time out. The Blues remained without Fran Kirby (ankle).

Katie McCabe’s cross dropped for Miedema but her effort was deflected off target, and from the ensuing corner, Williamson rose to head Mead’s delivery wide.

But Chelsea’s long unbeaten run of 26 WSL matches looked set to come to an end when Arsenal took the lead from the next attack as Mead swept in Miedema’s low cross. It meant Miedema equalled Nikita Parris’ record of being involved in 74 goals in this competition, including assists, and Hayes immediately responded with a double substitution with Niamh Charles and Charlotte Fleming being introduced.

And the visitors underlined their title credentials as reigning champions as Harder’s cross from the right flicked off the unfortunate Wubben-Moy to deflect the ball over Zinsberger and into the net. Elsewhere in WSL on Sunday…

Earlier in the day, Ireland international Rianna Jarrett got her first goal in the WSL as Brighton & Hove Albion won 1-0 at West Ham United, flicking the ball over the goalkeeper before heading home in the 69th minute.

Claudia Walker got the only goal as Birmingham City won 1-0 at Aston Villa on Saturday, and Ebony Salmon’s late goal secured a 2-2 draw against Tottenham Hotspur that gave bottom side Bristol City their first point of the season.

Early-season pace-setters Everton were held to a 1-1 draw at home by Reading on Saturday after Natasha Harding cancelled out Simone Magill’s first-half opener.