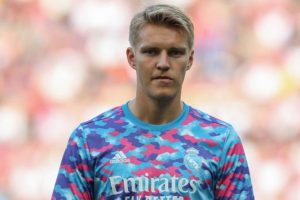 Arsenal are in desperate need of some creativity this summer after a lacklustre season in front of goal last time out. Mikel Arteta’s side could only muster 55 Premier League strikes last term – their lowest tally since before Arsene Wenger’s time in charge.

The Gunners have been linked with James Maddison this summer, but Leicester City are apparently demanding big money for one of their star performers.

And, according to Sky Sports journalist Fabrizio Romano, the Norway international is the player the north London club really want to land.

“Arsenal board now waiting for Real Madrid final decision on Odegaard future – they’d be ready to bid for the Norwegian talent.”

Arsenal have been hit by creativity issues during the last few campaigns and have struggled in front of goal.

They are a far cry from the free-flowing attacking machine fans were used to witnessing under Wenger.

With the likes of Mesut Ozil and Alexis Sanchez in the side, Arsenal racked up the goals. But in recent seasons it’s been a completely different story.

The Gunners managed a measly 56 goals in the 2019/20 season before last season’s meagre return.

Odegaard impressed at the Emirates Stadium last term and Arsenal certainly looked a better side with him in the team.

The 22-year-old became a key player for Arteta after arriving at the club in January, making 14 Premier League appearances and playing six times in the Europa League as Arsenal reached the semi-finals.

Odegaard has never quite managed to cement his place in the Real side, but has enjoyed a series of productive loan spells since moving to Madrid from Norwegian club Stromsgodset in 2015.

He notched three goals and five assists during a spell with Heerenveen, before enjoying scintillating form with Vitesse in the 2018/19 season – scoring 11 goals and assisting 12 others in just 39 games.

The player then proved he could mix it in Spain, producing seven goals and nine assists during one season with Real Sociedad.

Odegaard has only played 11 games for his parent club and Real could be willing to sanction a move to Arsenal if the right price is agreed.

With Arsenal set to open their Premier League season with a trip to Brentford on Friday night, the Gunners will have to act quickly if they are to land their man.