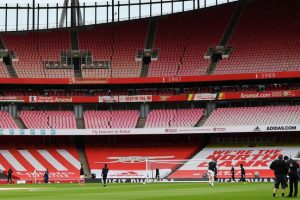 Arsenal have been working closely with intelligence analysts from the Metropolitan Police as security is tightened ahead of Thursday night’s Europa League semi-final, second leg against Villarreal.

Sunday’s demonstrations at Manchester United, when fans broke into Old Trafford, have prompted an increase in the number of stewards and police officers who will be inside and outside the Emirates Stadium.

Particular attention has been given to monitoring social media channels by the Met’s football intelligence unit, to guarantee that authorities are not taken by surprise if unlawful behaviour has been planned.

The Met Police told Sky Sports News: “A proportionate policing plan is in place for this evening as is the case with all football fixtures.

“We work closely with all of our football clubs and that has continued throughout this week.

“Our officers will engage with those present to ensure compliance with Covid regulations and to prevent crime and disorder.”

Additional security for both players and UEFA officials has been drafted in as Arsenal look to overturn a 2-1 deficit against Villarreal and reach the final in the Polish city of Gdansk, where either Manchester United or Roma await.

Like their Manchester United counterparts, some Arsenal fans remain dissatisfied with owner Stan Kroenke’s running of the club.

However, a repeat of last Sunday’s scenes at Old Trafford appear unlikely in north London.

It’s crunch time for Arsenal as they prepare for their Europa League semi-final second leg against Villarreal as their European hopes for next season hang in the balance.

The Gunners trail 2-1 from the first leg in Spain last week, but Nicolas Pepe’s penalty handed Arsenal an away goal lifeline that seemed almost impossible after an hour.

Arteta: We can’t be distracted by takeover talk

Mikel Arteta says his Arsenal players cannot afford to be distracted by talk of a takeover at the club ahead of their Europa League semi-final second leg against Villarreal.

It was confirmed by Thierry Henry this week Spotify owner Daniel Ek has “reached out” to the Kroenke family to present an offer to buy Arsenal.

Ek is confident the offer – which is expected to be worth around £1.8bn – will be considered and has the full backing of Henry and fellow Arsenal legends Patrick Vieira and Dennis Bergkamp.

“We have to try to be away from all of the rumours and everything that is happening around the club,” said Arteta.

“We have to focus on the pitch because the best way to help the football club is to win football matches and be competitive at the highest level.

“It’s a massive game for the club and if we win we will be much closer to getting a trophy. Winning always helps for the future, it is the best way to prepare for anything.”