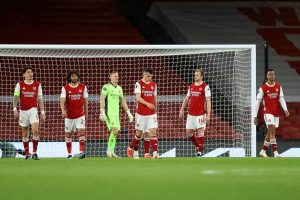 Arsenal missed a host of chances, then thought they had won it – but were ultimately pegged back by Slavia Prague for a 1-1 draw in the Europa League quarter-final first leg on Thursday night.

The away side settled the quicker and probed for an opener, but a fierce drive over the bar from range by Lukas Provod was the best they could muster in the spell they had on top. The Gunners then started to dominate possession, though it was often safe and passive rather than entirely convincing in an attacking sense.

Bukayo Saka sent a shot wide of the post when played through on goal, his blushes perhaps spared by an erroneous offside flag which would have been overruled had he netted, while Rob Holding saw a firm header tipped over the bar before the break.

Immediately after the restart Willian clipped the outside of the post from a free-kick, but the biggest miss of all was Alexandre Lacazette’s run-through from the halfway line, one on one with the goalkeeper on the hour, only to strike the crossbar with his effort. Mikel Arteta then made a host of changes and two combined for a late goal, Pierre-Emerick Aubameyang setting away Nicolas Pepe to coolly finish into the bottom corner with five minutes left to play – before Tomas Holes nodded in an injury-time equaliser at the other end.

Here are the Arsenal player ratings from the first leg at the Emirates Stadium.

Bernd Leno – 6. Had very little to do after the opening 15 minutes until a stoppage-time save onto the post. That fine piece of handling was ruined moments later when he couldn’t prevent the equaliser.

Hector Bellerin – 6. Occasionally got into advanced areas but was largely in a support role. Mostly untroubled at the back on his side.

Rob Holding – 7. Went close with one or two headers on goal and was very reliable at the heart of defence, though beaten for pace when pulled out to the channel behind his full-back.

Gabriel Magalhaes – 7. A rather more mixed night for the Brazilian, who lost the ball twice in dangerous areas – but recovered well to make blocks on both occasions.

Cedric Soares – 5. Got into attacking positions but regularly had to check back onto his right foot. Beaten on the counter down the wing a few times and his clearances were awkward at best.

Thomas Partey – 5. Nowhere near one of his best matches. Some wayward passing and missed a few tackles.

Granit Xhaka – 5. Very slow moving the ball on, hampering his team’s build-up play, and not entirely dominant in winning back possession either.

Willian – 5. Struck the post with a set-piece but was otherwise ineffective throughout. Subbed off first.

Emile Smith Rowe – 6. Tried to make a few things happen in the first half but faded out of the game.

Bukayo Saka – 7. Arsenal’s greatest threat, using his pace in the right channel several times – but should have scored with a first-half chance.

Alexandre Lacazette – 6. Worked hard and showed good movement at times, but failed in his primary role: putting the ball in the net. How he didn’t finish the one-on-one, only he will know.

Gabriel Martinelli – 6. Fired a shot over but did add some urgency to Arsenal’s play.

Pierre-Emerick Aubameyang – 7. Side-footed wide straight after coming on, then slid a through-pass for the goal.

Nicolas Pepe – 7. Lots of pace and even more composure to score the Gunners’ goal.