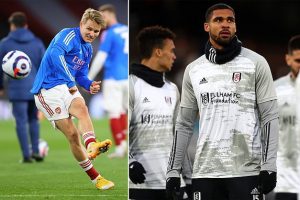 Arsenal vs Fulham LIVE: Mikel Arteta’s side look to keep their top-four hopes alive as they host Scott Parker’s relegation-threatened team… who are in desperate need of three points

Arsenal host Fulham in the first game of the day in the Premier League at the Emirates Stadium.

Mikel Arteta’s team come into this one off the back of an impressive 4-0 victory against Slavia Prague in the Europa League quarter-finals on Thursday.

Scott Parker’s Cottagers, meanwhile, lost 1-0 at home to Wolves last week and are running out of games to stay up – they are currently seven points off Burnley in 17th, having lost four on the bounce.

Sportsmail’s JEORGE BIRD will provide live coverage of of Arsenal vs Fulham in the Premier League, including build-up, team news and in-game updates.

There’s an opportunity to impress in goal today for Mat Ryan, who is on loan at Arsenal from Brighton.

Ryan has made just one previous appearance for Arsenal, but he starts today, with Bernd Leno on the bench.

Fulham are in 18th place and time is running out for them to preserve their Premier League status – they are seven points adrift of Burnley, who have a game in hand.

A win at Emirates Stadium, however, would give Scott Parker’s side a major boost in their quest to stay up.

These sides met on the opening weekend of the season, with Arsenal running out 3-0 winners on that occasion. If the Gunners manage to prevail today then they will be one point behind Everton and two behind Tottenham.

Good afternoon and welcome to our live coverage of Arsenal versus Fulham, with the game getting underway at 1.30pm.