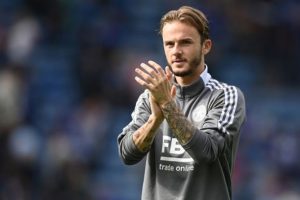 Arsenal are refusing to let their interest in James Maddison subside, with the latest reports indicating that they will persist until the end of the transfer window in order to thrash out a deal. The news comes as transfer chief Edu is reportedly prepared to sanction two more players for Mikel Arteta before facing the season ahead.

It was thought that the Gunners could be best served pursuing other options, with Leicester attempting to price clubs out of a deal for their highly-rated Englishman.

Having proven himself during his three full seasons in the Premier League so far, however, it is not surprising to see Maddison high up on Arsenal’s list of candidates.

Attacking midfield is a key area for Edu this summer, with no permanent replacement signed since Mesut Ozil met his unfortunate demise at the hands of Arteta.

According to The AFC Bell, Maddison is being pursued alongside a more affordable target in Martin Odegaard.

The Norwegian spent the second-half of last season on loan at the Emirates, and is supposedly available for around £30million.

Allegedly, the Gunners are pursuing both in anticipation that one deal will hit a stumbling block at some point during negotiations.

To the disappointment of the most ambitious Arsenal fans, it means that the possibility of signing both players is off the table, with a case of one or the other far more likely.

All things considered, a deal for Maddison looks less probable than Odegaard because of price-tag issues, as well as the inherent difficulty of dealing with a top-four rival.

The joker up Arsenal’s sleeve, however, is the fact that they have an alternative waiting in the wings if a deal for Maddison fails to materialise.

Essentially, this takes all of the leverage out of Leicester’s hands, as Arsenal could comfortably walk away from the deal if they did not like the quoted price.

The Foxes would thus be forced to name a reasonable transfer fee for Maddison if they are keen to cash in on the 24-year-old before the end of the summer.

Maddison does seem to be a key part of Brendan Rodgers’ plans, but Leicester have invested heavily over the past few weeks with far more money going out than coming in.

Patson Daka, Boubakary Soumare, Jannik Vestergaard and Ryan Bertrand have all been recruited, at a cost of over £60m, which could make the sale of Maddison more of a necessity than anything else.

Whoever joins Arsenal’s attacking-midfield contingent will face fierce competition from Emile Smith-Rowe, who put in a strong performance in their 2-0 loss to Brentford after being handed the No 10 jersey.

Nevertheless, it was still a defeat, and one that makes Arteta and Edu’s next move in the transfer market absolutely crucial.